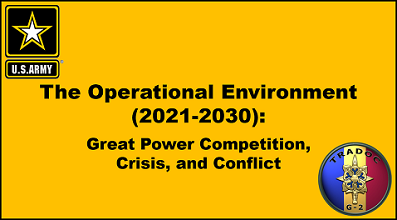 “Our adversaries are not just thinking in terms of matching us in materiel, but also in terms of people and approaches to warfare. They are challenging each of these pillars, which for many in the Army have become cherished truisms. The dominance that we achieved is not a fact of life, but is instead a contest in which we engage each day. We cannot rest on our laurels, but must instead find new ways to equip, train, and lead the greatest fighting force in the world.”

[Editor’s Note:  The U.S. Army Training and Doctrine Command (TRADOC) has approved and published The Operational Environment (2021-2030):  Great Power Competition, Crisis, and Conflict.  This document is intended to complement previously published Operational Environment (OE) documents, expanding and adding to our understanding of the OE in light of recent events — think of it as an addendum.  The document explores the impact of COVID-19 on the OE and presents four potential post-pandemic alternative futures to consider in terms of Competition, Crisis, and Conflict.  It addresses China as our designated Pacing Threat and Russia as a near-peer threat; and describes their respective efforts to modernize and challenge the Army’s dominance in the land power domain as they endeavor to prevail in Competition, Crisis, and Conflict against the United States.  This document also explores the impact of Climate Change on the OE and the associated challenges and opportunities facing the Army.  Additionally, it is aligned with, and informed by, the Joint Operating Environment 2040, the Interim National Security Strategy, and Chief of Staff of the Army (CSA) Papers.  Today’s post features an excerpt of its Key Judgements; a link to the comprehensive document may be found at the conclusion of today’s post, along with a host of additional, informative links — Read on!] 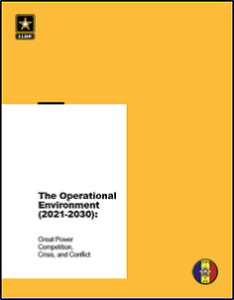 possible threat to the Homeland, the impacts of the COVID-19 pandemic on the OE represent a significant shock to the system that required new analysis, the context of which is addressed in Chapter 1.

Chapter 2 presents the efforts of China and Russia to develop and modernize their militaries and focus on prevailing in Competition, Crisis, and Conflict against the United States.

Chapter 3 focuses on the COVID-19 pandemic, and most importantly, on its impact on the OE in terms of the power dynamic between the United States, China, and Russia. It offers four potential alternative futures—called worlds—to consider the impact of the pandemic in terms of Competition, Crisis, and Conflict. 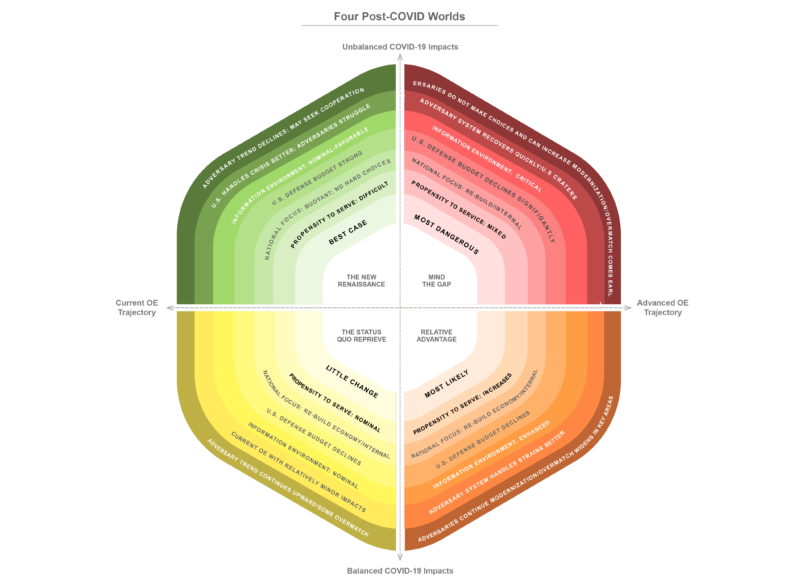 Chapter 4 provides a deeper insight into the impact of our adversaries’ modernization efforts, which directly challenge the key pillars of the U.S. Army’s post-DESERT STORM dominance in the land power domain.

Opportunities exist for the U.S. Army to future-proof the force. For instance, the Army can potentially overcome materiel capacity challenges from our adversaries by reshaping the force to be faster, more adaptive, more lethal, and one equipped with cost-informed systems more easily produced at scale.

The U.S. military can lean on the unique strengths of its allies in NATO and 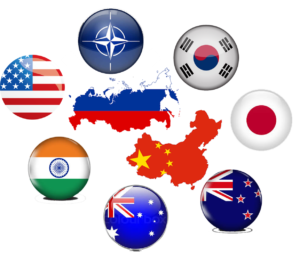 throughout the INDOPACOM region. Common purpose with like-minded states adds significant value in Competition, Crisis, and Conflict—particularly when the many of the adversaries’ allies are the victims of coercion.

If you enjoyed this post, download and check out The Operational Environment (2021-2030): Great Power Competition, Crisis, and Conflict in its entirety here.

Explore the U.S. Army’s single consistent OE narrative (spanning the near, mid-, and far terms out to 2050) further in:

Four Models of the Post-COVID World, The Operational Environment: Now through 2028, and Threats to 2030 video

Learn more about China as our Pacing Threat in the following TRADOC G-2 content: