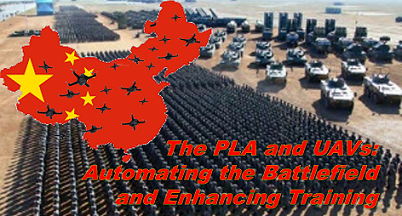 [Editor’s Note:  Today’s post consists of two articles — excerpted from the July 2021 edition of the OE Watch, published by the Foreign Military Studies Office, TRADOC G-2, and accessed via the Operational Environment Enterprise home page — your portal to the latest TRADOC G-2 content!   As noted previously by Dr. Jacob Barton, China has been modernizing the People’s Liberation Army (PLA) across the  Doctrine, Organization, Training, Materiel, Leadership and education, Personnel, Facilities, and Policy (DOTMLPF-P) spectrum.  The first excerpt below describes how the PLA is progressing its Unmanned Aerial Vehicle (UAV) capabilities from fleet operations to “informationized” group operations to “intelligentized” swarm operations in its drive to realize an unmanned battlefield.  The second excerpt describes how they are employing Electronic Warfare (EW) UAVs to provide their OPFOR with a “Blue” EW capability — enabling PLA Commanders to test their respective Brigades’ mettle against a “cunning blue army” in a complex electromagnetic environment during live training exercises.

Read on to learn how our Pacing Threat is upping its game — then drill down further at the bottom of the post to learn more about  China and the PLA, review how they are harnessing the power of autonomous systems, and explore more about robotics and autonomy in the Operational Environment!] 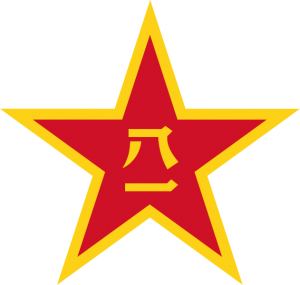 The authors describe the concept of UAV fleet operations as rooted in mechanized warfare, placing this stage of UAV group employment within the current capabilities of the PLA. UAV fleet operations are described as a collection of three or more UAVs operating under a unified command and implementing the same combat action to achieve a common goal. UAV fleet operations reflect mechanized warfare capabilities in that their combat effectiveness is generated by quantity and scale enhancing firepower support and killing efficiency. The advantages include that this type of operation is conducive to centralized management and high efficiency for simple tasks; disadvantages include low efficiency for task coordination, weak distributed task capabilities, weak group scalability, and weak adaptability. The primary missions are firepower focused.

UAV group operations represent informationized warfare capabilities. Currently, the PLA is in the process of modernization based on information technologies with these capabilities growing within the force. UAV groups are interconnected by onboard computers and communications network. UAV groups operate 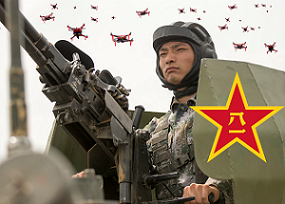 under a unified command, which jointly manages the execution of a common task. The UAV group acts as a unified whole cooperating in a combat activity. UAV group operations generate combat power based on information empowerment, networking, and coordination of actions within the group. Advantages include high efficiency for task coordination, strong operational flexibility, the capability to perform distributed combat tasks, and group scalability; disadvantages include a high requirement for information technologies, complex UAV design, and vulnerability to electronic interference.

UAV swarm operations are described as a biological simulation of a bee colony enabled by intelligent technologies. A UAV swarm is defined as a group of autonomous, networked UAVs working to achieve a unified operational objective. The UAV swarm is based on groups of intelligent drones working in collaboration. The individual drones might have low intelligence, but through interactive and reactive rules they emerge as a complex group with self-organizational capabilities. Characteristics include decentralization, flexibility, and group intelligence working towards a common objective. The authors believe that UAV swarm operations subvert traditional warfare concepts through their autonomous combat capabilities of self-adaptation, self-organizing networks, self-coordination, and self-decision making. Advantages include high efficiency for task coordination, strong operational flexibility and battlefield adaptability, strong capability to conduct distributed tasks, and group scalability. Disadvantages include a requirement for large numbers of advanced drones and high research requirements in biological simulation technology. While many of these UAV concepts are generally well-known, this current PLA research on intelligent technologies and operational concepts will assist in the eventual deployment of these capabilities within the military, and as the authors envision, toward an unmanned battlefield. 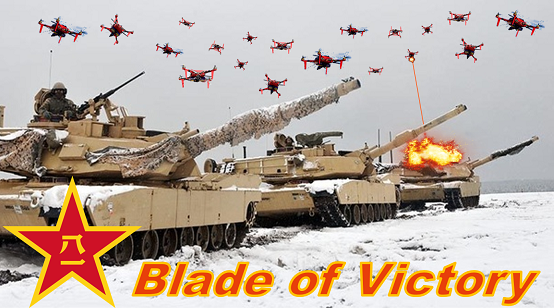 “the development of UAV new operation mode is becoming more and more mature.”

The Peoples’ Liberation Army (PLA) has used UAVs for reconnaissance and strike operations in training for years. Recently the PLA press reported on an exercise by the 72nd Group Army in the Eastern Theater conducting a confrontation exercise with an “Electromagnetic Blue Army,” employing electronic warfare UAVs to provide a complex electromagnetic environment for the brigade’s training. The brigade had recently received new communications and air defense-related equipment to be tested in the electromagnetic environment. The electronic warfare equipment manufacturer assisted the opposing force in the exercise. The equipment manufacturer also participated in an after-action assessment suggesting tactics, techniques, and procedures for the brigade to employ in the future. This unit’s innovation was a unique example of “Blue” electronic warfare incorporated into the PLA’s new military training system.

“At present, our army is speeding up the construction of a new military training system to comprehensively improve the training level and the ability to win.”

“In the air, a number of UAVs mounting jamming equipment launched a ‘surprise attack’; In a ground shelter, the operator flexibly adopts a variety of means to implement anti-jamming…. Recently, in a brigade training ground of the 72nd group army, a number of air-ground electronic countermeasures have been launched fiercely. What makes the reporter’s eyes bright is that this time the ‘cunning blue army’ is not a brother army, but an equipment manufacturer.”

“At present, our army is speeding up the construction of a new military training system to comprehensively improve the training level and the ability to win. This is a road that no one has ever gone through before. No stage is ready for everything. There will always be difficulties or contradictions in one way or another. If you encounter problems and take a detour, or simply ‘wait and see’, you will miss the opportunity and accomplish nothing.”

If you enjoyed this post, learn more about China as our Pacing Threat in:

… review the PLA’s efforts to harness the power of autonomous systems in the following content:

… and explore more about robotics and autonomy in the Operational Environment in: