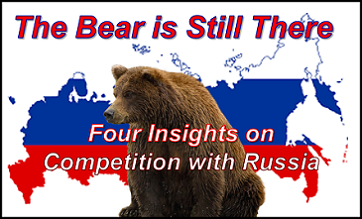 [Editor’s Note:  The U.S. Army’s current operating concept states:  “Russia has demonstrated the intent and the most effective combinations of systems and concepts to challenge the U.S. and its allies militarily in the near term. Russia’s actions in Georgia, Ukraine, and Syria have demonstrated their intent to fracture the relationship between the U.S. and its partners and their ability to pursue strategic objectives below the threshold of armed conflict. Russia uses unconventional and information warfare to propagate 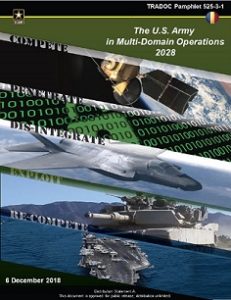 a narrative that breeds ambiguity and delays the reactions of their adversaries. Over the last decade, Russia has increased its investments in anti-access and area denial capabilities and systems intended to deny the Joint Force entry into a contested area and set the conditions for a fait accompli attack.” — TP 525-3-1, The U.S. Army in Multi-Domain Operations 2028, 6 December 2018, p. 7

Today’s post captures four key insights regarding our on-going competition with Russia, as gleaned from a senior leader session hosted by the U.S. Army Training and Doctrine Command (TRADOC). Read on to learn about the implications of this competition for the United States and the U.S. Army! (Please review this post via a non-DoD network in order to access all of the embedded links — Thank you!)]

Russia continues to modernize its military’s technology and professionalize its force. Understanding these efforts will be essential to U.S. success in a new era of great power competition, where divisions between Russia, the West, and the East are likely to be exacerbated. To that end, TRADOC hosted a senior leader session to explore multiple aspects of Russian force modernization. Here is what we learned:

1. Russia is seeking to develop artificial intelligence (AI) and unmanned systems (UxS) for combat, decision-making, de-mining, intelligence, surveillance, and reconnaissance. The Russian military is starting to cooperate with domestic academic, industry, and private sector organizations to achieve this goal. Lessons learned from recent combat experience in Syria, Ukraine, and Nagorno-Karabakh have enhanced these efforts and improved platform development, testing, and evaluation. Indeed, the defeat that the Azerbaijan military, equipped with Turkish and Israeli manufactured armed UAS and loitering munitions, inflicted on Russia’s Armenian proxies in 2020 served as a wake up call for many in the Russian defense establishment, with military journalist Victor Baranets bemoaning the fact that while “there are hundreds of light and medium-sized drones in the Russian military,” they still do not possess “attack drones in the required quantity.”  That said, the Russian military is developing man-machine teaming concepts of operation at all levels. Russia is also working to harden and protect these technologies from adversarial interference, particularly to extend its advantage in electronic warfare.

UxS are being implemented even in the lowest levels of the Russian military. In order to ensure complete integration of these platforms, Russia has incorporated increased training in UxS at all levels of military education. Although Russian AI development is still nascent and largely driven by the government, Russia is remaining flexible and attempting to use a whole-of-government approach to develop AI for decision-making, facial recognition, image recognition, and unmanned swarming systems. In the next several years, the Russian military will start fielding multiple long-range combat UxS, while starting to redesign its general warfighting concept of operations in order to incorporate this new technology into existing ranks.

Explore this topic further in these related posts:  Russia: Our Current Pacing Threat; Insights from the Robotics and Autonomy Series of Virtual Events, as well as all of the associated webinar content (presenter biographies, slide decks, and notes) and  associated videos [via a non-DoD network]; Major Trends in Russian Military Unmanned Systems Development for the Next Decade, Russian Ground Battlefield Robots: A Candid Evaluation and Ways Forward, and Autonomous Robotic Systems in the Russian Ground Forces, by proclaimed Mad Scientist Sam Bendett; Insights from the Nagorno-Karabakh Conflict in 2020; and “Once More unto The Breach Dear Friends”: From English Longbows to Azerbaijani Drones, Army Modernization STILL Means More than Materiel, by Ian Sullivan. 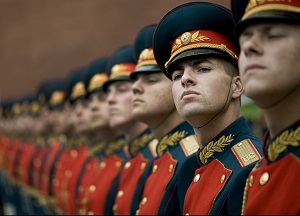 2. Russia is working to modernize and professionalize its military forces, with mixed results. Russia continues to view the United States as the “gold standard” in the professionalization of its military and has sought to emulate aspects of U.S. training to the extent allowed by its budget. In order to increase trust and retention in their military, Russia has improved many quality of life aspects for conscripts and contract servicemen, to include better living conditions (e.g., nutrition and housing), increased communication and interaction between Soldiers and their families, implemented changes to its training programs, and instituted other reforms to reduce hazing. These efforts have helped to reduce incidences of draft dodging and hazing, and led to the public’s increased level of trust in the institution.

However, military operations within the gray zone and continued connections with mercenary groups have hindered the Russian military’s ability to build upon this trust. The military’s demonstrated relationship to mercenary groups, combined with consistent denial of this connection by military officials, threatens to undermine credibility and trust both within the military and with the public. Signals of stalling professionalism and an erosion of public trust would include sliding retention rates as Soldiers leave to join private military companies, increased draft dodging, and a return of hazing. Monitoring conscript mothers’ 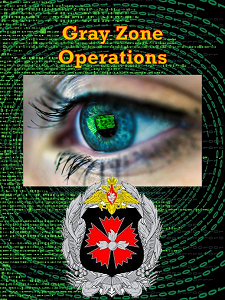 social media groups could serve as a key barometer of the Russian military’s health. Additionally any consideration of deploying one-year conscript troops – about a third of Russian active duty land forces –- would, with their connectivity with the mainstream Russian population, be challenging in any major long-term cross-border operation, especially if in proximity to controversial gray zone type actions.

Explore this topic further in these related posts: Russia: Our Current Pacing Threat; Character of Warfare 2035; Russian Private Military Companies: Their Use and How to Consider Them in Operations, Competition, and Conflict; Competition in 2028 – Anticipating Russian Exploitation of the Operational Environment; The Death of Authenticity: New Era Information Warfare; Insights from the Mad Scientist Weaponized Information Series of Virtual Events; Weaponized Information: One Possible Vignette; Three Best Information Warfare Vignettes; Blurring Lines Between Competition and Conflict; and Sub-threshold Maneuver and the Flanking of U.S. National Security.

3. Russia continues to struggle with an “inferiority complex” relative to the West that affects decision making. Narratives within the country emphasize that Russia has been a victim of Western policy and contributes to the current state of distrust between the United States and Russia. A culture of distrust, secrecy, and continued corruption has kept Russia more inwardly focused and less inclined towards finding opportunities for cooperation with the US.

Importantly, however, future technology advancements may provide new opportunities for collaboration between the United States and Russia, as the two countries seek to identify ways to integrate new platforms while minimizing their associated disruption.

4. Russia and China currently collaborate on a transactional basis – the United States must be mindful of not inadvertently pushing the two traditionally distrusting countries closer together. Russia and China clearly have a growing partnership across multiple sectors. Their military cooperation, including exercises, is deepening – the key will be if these activities move from colocation to real Joint unit and system interoperability. Their perception regarding the US as their primary hard and soft power threat is similar. Beijing and Moscow are increasingly sharing technology across non-military sectors, but have yet to do so in more sensitive military areas. The United States and its allies will need to watch for increased operational integration between the two countries and should take care not to engage with either in a way that will drive them closer together.

Conclusion:  Although constrained financially, Russia is seeking to implement reform to modernize and professionalize its force, drawing upon the standards they observed from the United States, but applied to Russia’s military culture, traditions, and problem sets. While these efforts have been somewhat successful in increasing retention and trust in the Russian military, Russian operations within the gray zone, as well as questionable ethical decisions, threaten to undermine its credibility in future operations.

In order to compete with a modernizing Russia, the United States will need to be particularly aware of the developing relationship between Russian and China. While a full-fledged Russian-Chinese alliance is not on the horizon, the two countries may join forces on a transactional basis to confront a perceived US threat. The US should avoid taking actions or adopting policies which would strengthen the Moscow-Beijing relationship.

>>>> REMINDER:  Mad Scientist is pleased to announce our next virtual

… as they present their unique perspectives regarding Climate Change’s impact on the Operational Environment and the associated implications for the U.S. Army, and then answer questions from registered participants.

This event will be preceded by a Mad Scientist Laboratory blog post compiling the insights that we’ve learned to date regarding climate change (to be published on 8 Apr 21), and followed by a Mad Scientist “The Convergence” podcast with Mr. Richard G. Kidd IV, Deputy Assistant Secretary of Defense for Environment and Energy Resilience at United States Department of Defense, and proclaimed Mad Scientist (to be published on 29 Apr 21), addressing the resiliency challenges and opportunities facing the Department of Defense, and the U.S. Army in particular.