[Editor’s Note: Regular readers will note that one of our enduring themes is the Internet’s emergence as a central disruptive innovation. With the publication of proclaimed Mad Scientist P.W. Singer and co-author Emerson T. Brooking’s LikeWar – The Weaponization of Social Media, Mad Scientist Laboratory addresses what is arguably the most powerful manifestation of the internet — Social Media — and how it is inextricably linked to the future of warfare. Messrs. Singer and Brooking’s new book is essential reading if today’s Leaders (both in and out of uniform) are to understand, defend against, and ultimately wield the non-kinetic, yet violently manipulative effects of Social Media.]

“The modern internet is not just a network, but an ecosystem of 4 billion souls…. Those who can manipulate this swirling tide, steer its direction and flow, can…. accomplish astonishing evil. They can foment violence, stoke hate, sow falsehoods, incite wars, and even erode the pillars of democracy itself.” 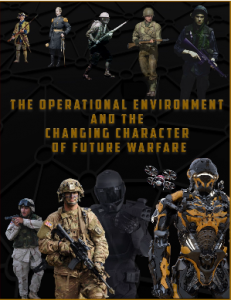 As noted in The Operational Environment and the Changing Character of Future Warfare, Social Media and the Internet of Things have spawned a revolution that has connected “all aspects of human engagement where cognition, ideas, and perceptions, are almost instantaneously available.” While this connectivity has been a powerfully beneficial global change agent, it has also amplified human foibles and biases. Authors Singer and Brookings note that humans by nature are social creatures that tend to gravitate into like-minded groups. We “Like” and share things online that resonate with our own beliefs. We also tend to believe what resonates with us and our community of friends.

“Whether the cause is dangerous (support for a terrorist group), mundane (support for a political party), or inane (belief that the earth is flat), social media guarantees that you can find others who share your views and even be steered to them by the platforms’ own algorithms… As groups of like-minded people clump together, they grow to resemble fanatical tribes, trapped in echo chambers of their own design.”

The advent of Social Media less than 20 years ago has changed how we wage war.

“Attacking an adversary’s most important center of gravity — the spirit of its people — no longer requires massive bombing runs or reams of propaganda. All it takes is a smartphone and a few idle seconds. And anyone can do it.” 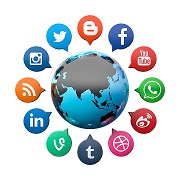 Nation states and non-state actors alike are leveraging social media to manipulate like-minded populations’ cognitive biases to influence the dynamics of conflict. This continuous on-line fight for your mind represents “not a single information war but thousands and potentially millions of them.”

LikeWar provides a host of examples describing how contemporary belligerents are weaponizing Social Media to augment their operations in the physical domain. Regarding the battle to defeat ISIS and re-take Mosul, authors Singer and Brookings note that:

“Social media had changed not just the message, but the dynamics of conflict. How information was being accessed, manipulated, and spread had taken on new power. Who was involved in the fight, where they were located, and even how they achieved victory had been twisted and transformed. Indeed, if what was online could swing the course of a battle — or eliminate the need for battle entirely — what, exactly, could be considered ‘war’ at all?“ 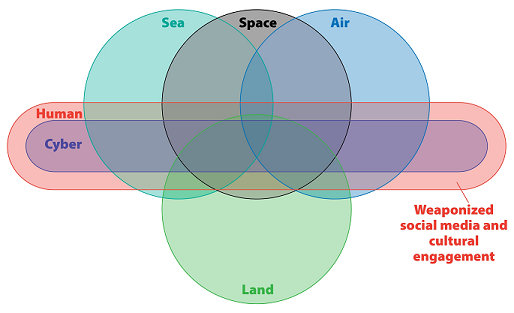 Even American gang members are entering the fray as super-empowered individuals, leveraging social media to instigate killings via “Facebook drilling” in Chicago or “wallbanging” in Los Angeles.

And it is only “a handful of Silicon Valley engineers,” with their brother and sister technocrats in Beijing, St. Petersburg, and a few other global hubs of Twenty-first Century innovation that are forging and then unleashing the code that is democratizing this virtual warfare. 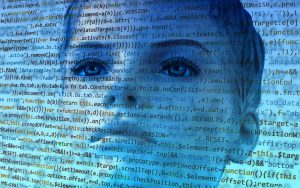 Seeing is believing, right? Not anymore! Previously clumsy efforts to photo-shop images and fabricate grainy videos and poorly executed CGI have given way to sophisticated Deepfakes, using AI algorithms to create nearly undetectable fake images, videos, and audio tracks that then go viral on-line to dupe, deceive, and manipulate. This year, FakeApp was launched as free software, enabling anyone with an artificial neural network and a graphics processor to create and share bogus videos via Social Media. Each Deepfake video that:

“… you watch, like, or share represents a tiny ripple on the information battlefield, privileging one side at the expense of others. Your online attention and actions are thus both targets and ammunition in an unending series of skirmishes.”

Just as AI is facilitating these distortions in reality, the race is on to harness AI to detect and delete these fakes and prevent “the end of truth.”

– Listen to the accompanying playlist composed by P.W. Singer while reading LikeWar.

– Watch P.W. Singer’s presentation on Meta Trends – Technology, and a New Kind of Race from Day 2 of the Mad Scientist Strategic Security Environment in 2025 and Beyond Conference at Georgetown University, 9 August 2016.

— Lt Col Jennifer Snow’s Alternet: What Happens When the Internet is No Longer Trusted?

One Reply to “87. LikeWar — The Weaponization of Social Media”