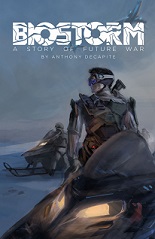 [Editor’s Note: Mad Scientist Laboratory is pleased to publish the following excerpt from Anthony DeCapite‘s short story of the same title.  This story was written, based on ideas developed in the SciTech Futures Technology Foresight Game:  Bio Convergence and the Soldier of 2050.  This game was conducted by the University of Southern California’s Institute for Creative Technologies, and supported by the SciTech Futures Technology Effort under the Office of the Deputy Assistant Secretary of the Army (Research & Technology). The views and opinions of authors expressed herein do not necessarily state or reflect official views or policies of the United States Army.]

The US and its remaining NATO allies are engaged in a limited war with the Mektigfolk, an ultra-nationalist techno-state that emerged from northern Europe during the reactionary upheavals that swept the continent in 2026.

The US has deployed a Joint Task Force to protect crucial rare-earth mining operations on a vast ice sheet in the Barents Sea.

Captain Steven Park and his infantry company, of the 10th Mountain Division, must protect an engineering detachment that will build a Combat Outpost around the Strand, a deep-sea mining facility.

It was good to be outside the wire. As Alpha Company commander, Captain Steven Park had been stuck within the confines of FOB Nordau for weeks while his Platoon Leaders got to go tramping around the ice shelf, conducting recon and planting sensors.

Not today. Nordau was 150 klicks behind them. Park had his company in a wedge formation, protecting the elements of 7th Engineer Battalion that followed them in a column. Their mission: to provide security for 7th Engineers while they built a Combat Outpost at their destination, a mining facility known as the Strand.

The Strand perched on the edge of the shelf, overlooking the Barents Sea. Right in the Mektig’s backyard. Beneath the facility was a treasure trove of a Rare Earth Element crucial in military guidance-and-control systems. With China throttling the global REE market, securing viable sources had become a NATO priority. [i]

Park couldn’t care less about REEs. He had trained host nation security forces and got in firefights with irregular fighters, but he had never faced a near-peer threat before. America had not done so in almost a century. Park was eager to prove his company was up to the task. 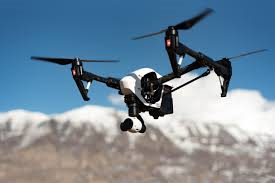 The long distance and extreme cold of the mission meant that every one of his Soldiers was packed in a Stryker, JLTV, or mounted on a snowmobile. The boys and girls of the 7th filled bulldozers, heavy equipment transports, and cargo trucks. From the view of their ISR quadcopter drone – the ‘Buzzard’ – the mass of vehicles looked like a deformed caterpillar inching across a white desert.

Park had shunned his JLTV seat and chosen a snowmobile, wanting to brave the same cold that his rifle squads faced here at the head of the caterpillar. There had been no sign of enemies for the entire movement, though their Buzzard, with its array of sensors, had detected a group of sea lions two klicks from the right flank. The latest intel said the nearest Mektig unit was 200 klicks southeast, moving to fortify Franz Josef.

“Six, this is One-Six.” Lieutenant Rowe, leader of First Platoon, was on the hook for him. “Buzzard’s detecting multiple objects descending toward us. Got the Javelins on it.”

The formation dispersed and exposed Soldiers piled into skinned vehicles. Park jumped off his snowmobile and SPC Logan helped him into a Stryker.

Park turned on the Augmented Reality display built into his HUD goggles, and a Picture-In-Picture materialized in the top right corner of his vision. It showed a computerized dome view of the airspace over their formation, with metadata: 24 spherical objects dropping like stones. [ii]
Park switched to optical view and zoomed in – softball-sized aluminum bomblets.

“Incoming!” The shout was repeated over the hook and echoed across the icy landscape.

Pff-pff-pff! Instead of exploding, the bomblets impacted in the snow. Then, there was a hiss, and green-brown mist erupted from the bomblets, enveloping the entire formation.

Shouts of “Gas-gas-gas!” crackled over the hook and Park’s Soldiers took out and put on their gas masks. Park tightened the straps on his own, securing it. Still, his nostrils filled with a rotten egg smell. Park felt no effects, and the bio-feedback readout in his HUD showed his Soldiers breathing normally. It wasn’t a chemical attack, at least not the kind Park feared.

First, 7th Engineer’s dozer ground to a halt in the ice. Then, the Stryker he was in stopped.

“Keep moving. We need to clear this gas.” Park ordered.

“It’s not me, sir! The engine died.” The driver replied.

Park heard a squeal of brakes, then there was a horrendous crunch of metal as something slammed into them, knocking Park’s helmeted head into SPC Logan’s.

Park used his AR PIP to get the bird’s eye view. A heavy equipment transport had slammed into his Stryker, and all around, vehicles were slipping and sliding to a stop.

“That gas attack disabled all the vehicles!”

Moments later, the pops of small-arms fire fulfilled his prophecy, echoing from the rear.

“Contact rear!” In his HUD’s PIP, Park saw a platoon-sized element of dismounted Mektig fighters firing on the rear of his formation. Park ran out of the immobilized Stryker. 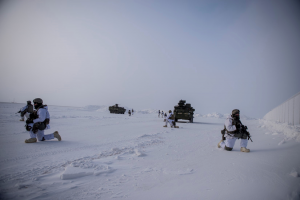 “Defensive formation! 3rd and 4th squad, on me!” Park said, and led them against the ambushers, using vehicles as cover. At this point, that was all they were good for.

He heard the hollow pings of rounds hitting a Stryker, and the shouts of “Contact!” that followed, but the sounds came from the front of the formation. The Mektigs had them in a pincer attack.

Bastards came here to wipe us out, Park thought, but kept that bitter realization from the hook.

“Focus fire missions on lead element attackers. We’re closer to the objective than to Nordau. We gotta break through,” he ordered. 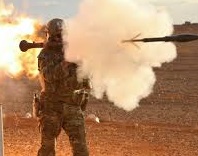 An RPG exploded a few yards from Park, lifting a snowmobile off the ground and ripping Sergeant Jones apart.

Jones. It hit Park like a punch in the gut, a sickening jolt that threatened to overwhelm him.

Smoke, steam, and the green-brown mist obscured the area.

Park tapped his HUD for the Buzzard’s view, activating multispectral imaging in the AR view, allowing him to see everything on the battlefield, through haze and ice and flesh.

SGT Meadows, in the Stryker Fire Support Vehicle, beat Park to the punch, designating a target that appeared instantly in every Soldier’s AR HUD, and another team in a Stryker mortar carrier launched three rounds in swift succession, pounding the attackers at the front end. SGT Meadows designated another target, and mortar rounds, grenades, and .50 caliber bullets ripped into that arm of the pincer. Then, in concert with his AR-enabled Soldiers, Park pushed back the other arm of the pincer, the attackers at the rear. There was no time to waste, and he got on the hook with his leaders:

“Account for your team, give me SITREPS, and get ready to double time to the objective.”

If you enjoyed this excerpt, Mr. DeCapite‘s full length article may be read at SciTech Futures, or at Small Wars Journal.

The SciTech Futures Technology Foresight Game: Bio Convergence and the Soldier of 2050 was facilitated in conjunction with the Mad Scientist Bio Convergence and Soldier 2050 Conference, co-sponsored by SRI International at their campus at Menlo Park CA, on 8-9 March 2018.  Read this Conference’s final report here, including Annex 3 documenting the comprehensive results of the SciTech Futures Technology Foresight Game.

Click here to learn more about USC ICT’s SciTech Futures Technology Effort and engage with their next Technology Foresight exercise.

Anthony DeCapite is a writer and creative content manager at USC ICT. He served in the Marine Corps as a Combat Videographer and Video Chief, and was honorably discharged as a Sergeant (E-5). A graduate of USC’s Writing for Screen and Television Program, he uses his Marine Corps experiences and creative chops to write and produce compelling experiences.

[i] Beneath the facility was a treasure trove of a Rare Earth Element… With China throttling the global REE market, securing viable sources had become a NATO priority.

As of this writing, China produces approximately 90 percent of the world’s supply of rare earth minerals. Rare earth elements are “easy to find” but “difficult to produce” (Vincent). This story posits a future in which the viable veins of certain REEs are scarce, a reasonable projection given the ever-growing global demand for new electronic devices.

[ii] Park turned on the Augmented Reality display built into his HUD goggles, and a Picture-In-Picture materialized in the top right corner of his vision.

“SciTech Futures Technology Foresight Game: Bio convergence and the Soldier of 2050,” Office of the Deputy Assistant Secretary of the Army (Research and Technology), June 11-16, 2018, accessed July 12, 2018.

In the SciTech Futures Technology Foresight Game, players were asked to invest virtual money “on behalf of” the U.S. Army, potential future adversaries, and society at large. Augmented Reality / Virtual Reality was a Top 10 idea by investment for the US Army. The player who submitted the idea, ghorstkj, noted that AR/VR needs to be a in the hands of Soldiers for maximum utility, instead of simply being fielded in a Tactical Operations Center or remaining highly developed in the commercial space.

The US Army is developing AR-enabled HUDs for Infantry Soldiers as of this writing.