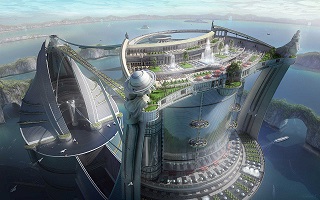 [Editor’s Note: Mad Scientist Laboratory is pleased to publish the following guest blog post by Mr. Lewis Jones. Originally a “Letter Home” submission to the Call for Ideas associated with the Mad Scientist Installations of the Future Conference (see more information about this event at the end of this post), we hope that you will enjoy Mr. Jones’ vision of a mid-Twenty First Century forward deployed base.]

Hey Dad, guess who got new PCS orders!  From March 2042 I’ll be assigned to Joint Base Harris in Japan.  You spent your early career in Japan, right?  I’ll never forget your stories about Camp Zama, a sprawling installation housing hundreds of soldiers and civilians. I  used to love hearing about the 2020s, when enemy sensors, drones, and artificial intelligence first wreaked havoc on operations there.

Remember the Garrison commander whose face was 3D-scanned by a rigged vending machine near the gate? The enemy released that humiliating video right before a major bilateral operation. By the time we proved it was fake, our partners had already withdrawn. 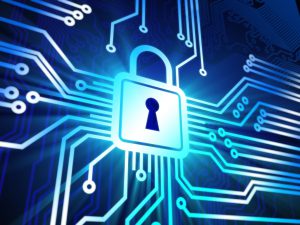 What about the incident at the intel battalion’s favorite TDY hotel with a pool-side storage safe? Soldiers went swimming and tossed their wallets into the safe, unaware that an embedded scanner would clone their SIPR tokens. To make matters worse, the soldiers secured the safe with a four digit code… using the same numbers as their token PIN.

Oh, and remember the Prankenstein A.I. attack? It scanned social media to identify Army personnel living off-base, then called local law enforcement with fake complaints. The computer-generated voice was very convincing, even giving physical descriptions based on soldier’s actual photos. You said that one soured host-nation relations for years! 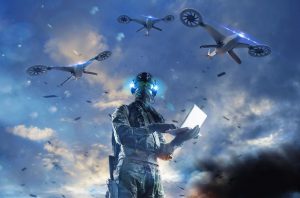 Or the drones that hovered over Camp Zama, broadcasting fake Wi-Fi hotspots. The enemy scooped up so much intelligence and — ah, you get the picture. Overseas bases were so vulnerable back then.
Well, the S1 sent me a virtual tour and the new base is completely different. When U.S. Forces Japan rebuilt its installations, those wide open bases were replaced by miniature, self-contained fortresses. Joint Base Harris, for example, was built inside a refurbished shopping mall: an entire installation, compressed into a single building!

Here’s what I saw on my virtual tour:

•  The ground level contains a water plant that extracts and purifies groundwater, along with indoor hydroponic farms. Special filtration units scrub the air; they’re even rated against CBRN threats.

•  Communications are encrypted and routed through a satellite uplink. The base even has its own cellphone tower. Special mesh in the walls prevent anybody outside from eavesdropping on emissions— the entire base is a SCIF.

•  The mall’s shops and food court were replaced by all the features and functions of a normal base: nearly 2,000 Army, Air and Cyber Force troops living, working, and training inside. They even have a kitchen-bot in the chow hall that can produce seven custom meals per minute!

•  Supposedly, the base extends several floors underground, but the tour didn’t show that. I guess that’s where the really secret stuff happens.

By the way, don’t worry about me feeling cooped up:  Soldiers are assigned top-notch VR specs during in-processing.  During the duty day, they’re only for training simulations. Once you’re off, personal use is authorized. I’ll be able to play virtual games, take virtual tours… MWR even lets you link with telepresence robots to “visit” family back home.

The sealed, self-contained footprint of this new base is far easier to defend in today’s high-tech threat environment. Some guys complain about being stuck inside, but you know what I think? If Navy sailors can spend months at sea in self-contained bases, then there’s no reason the Army can’t do the same on land! 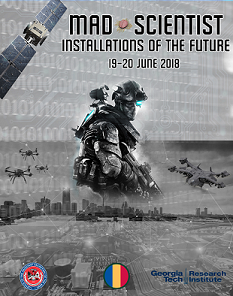 If you were intrigued by this vision of a future Army installation, please plan on joining us virtually at the Mad Scientist Installations of the Future Conference, co-sponsored by the Office of the Assistant Secretary of the Army for Installations, Energy and Environment (OASA (IE&E)); Georgia Tech Research Institute (GTRI); and Headquarters, U.S. Army Training and Doctrine Command (TRADOC),  at GTRI in Atlanta, Georgia, on 19-20 June 2018.  Click here to learn more about the conference and then participate in the live-streamed proceedings, starting at 0830 EDT on 19 June 2018.

Lewis Jones is an Army civilian with nearly 15 years of experience in the Indo-Pacific region. In addition to his Japanese and Chinese language studies, he has earned a Masters in Diplomacy and International Conflict Management from Norwich University. He has worked as a headhunter for multinational investment banks in Tokyo, as a business intelligence analyst for a DOD contractor, and has supported the Army with cybersecurity program management and contract administration. Lewis writes about geopolitics, international relations, U.S. national security, and the effects of rapid advances in technology.