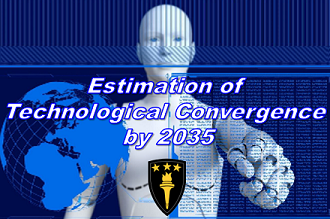 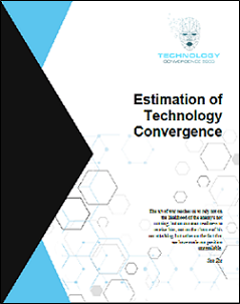 prepared this group Strategic Research Project as a partial requirement to complete their Master of Strategic Studies degrees from the United States Army War College. The research, analysis, and production of this product occurred over 24 weeks from October 2019 through March 2020 as part of the in-residence Army War College Senior Service College program.  Their final report (a link to which is provided at the bottom of this post), identifies six technological convergences “relevant to the United States Army over the next 15 years” — Enjoy!]

The Mad Scientist Fellows from the U.S. Army War College Class of 2020 tackled the following question for their Strategic Research Project:

How, when, and where are artificial intelligence, biotechnology, quantum technology, nanotechnology, neurotechnology, autonomous technology, robotics, and information technology likely to converge in ways relevant to the United States Army over the next 15 years?

Based on 31 innovations likely to occur across all eight of the aforementioned disciplines, there are at least six distinct, substantial technology convergences likely to occur that are relevant to the United States Army over the next 15 years. It did not escape the team’s notice that the unrestricted convergence of 31 innovations has the potential to produce 1.7069174e+46 possible outcomes!  Fortunately, after rigorous and diverse analyses, the team narrowed down the results to six convergences in which they have the most confidence and meet the three goals of being significant, militarily relevant, and occurring on or before 2035.

Of the six identified convergences, those dealing with the architectures of specific disciplines and information technology proved vital, followed by AI, virtual applications, and physical devices or processes.

It is highly likely innovations in information technology architecture, AI, quantum technology, autonomous technology, and nanotechnology will enable decentralized AI management of information processing and networking by 2035. Robust PONs will provide future data availability and quantum internet will provide network security, as well as data confidentiality and data integrity. Over the same time frame, the processing power of Internet of Things (IoT) devices will enable distributed and edge processing to be decentralized and remotely managed by AI. 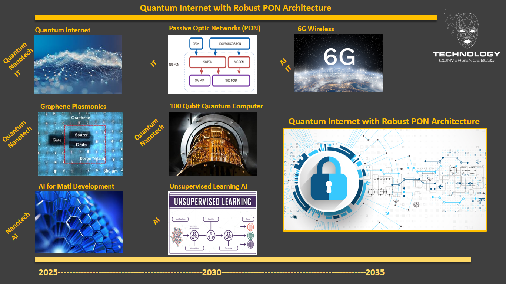 Possible use case:  Quantum Internet delivers secure and protected data, delivering on Confidentiality, Integrity, and Availability (CIA). A robust PON architecture provides the overmatch, network agility, and network maneuver to conduct both offensive and defensive cyber operations and win in the Cyber Warfare Domain between 2030 and 2035.

It is highly likely that innovations in nanotechnology, neurotechnology, biotechnology, information technology, quantum technology, and AI will allow for the mass production of human-to-computer interfaces that will reduce or even eliminate the use of mobile device visual/touch interfaces over the next 15 years. Over the same time frame, noninvasive devices such as Augmented Reality (AR) goggles and contact lenses, will give way to invasive implants such as bionic corneal replacements and more advanced noninvasive Brain Computer Interface (BCI) options. 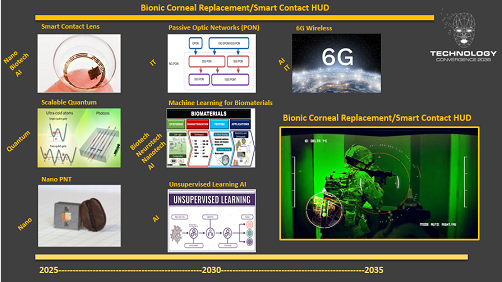 Possible use case:  This convergence will permit advances like a physically integrated Heads-Up Display (HUD) for automatic identification and marking of friends, foes, and unknowns in a Soldier’s field of vision, while squad and platoon leaders will be able to push AR markers — allowing for the concentration of fires or waypoints for movement.

Explore this topic further in these related posts:  The Guy Behind the Guy: AI as the Indispensable Marshal, by Mr. Brady Moore and Mr. Chris Sauceda; Psychological Warfare in the Human Domain: Mixing AI-Powered Technology with Psychosocial Engagement and “I Know the Sound it Makes When It Lies” AI-Powered Tech to Improve Engagement in the Human Domain, by proclaimed Mad Scientist LTC Arnel David, et al.; and Cyborg Soldier 2050: Human/Machine Fusion and the Implications for the Future of the DOD, by proclaimed Mad Scientist Dr. James Giordano, et al.

Large cities in technologically sophisticated countries are likely to integrate operations through the convergence of decentralized artificial intelligence, edge computing, autonomous systems, and 5G, by 2025. As telecommunications continue to advance, 6G will merge with these technologies, likely by 2035. While technical innovation is a primary driver for this convergence, other business and social factors significantly influence this convergence as well 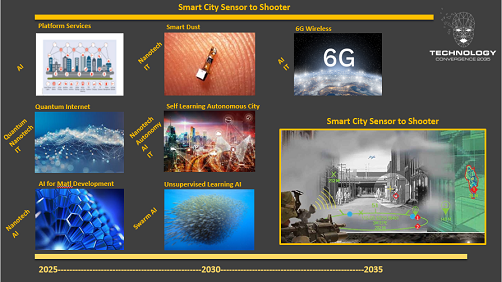 Possible use case:  The flexibility inherent in a decentralized, self-learning intelligence across a complex domain such as smart city could be leveraged to establish the sensor-to-shooter architecture for multi-domain operations and self-learning, decentralized intelligence used to operate a smart city could be engineered and deployed to learn our adversary’s region/city with potential non-kinetic effect.

The convergence of system capacity (AI, IT, and computing), combined with electromechanical advancements (robotics) and autonomy, will lead to robotic colonies employed for exploration, system management, and resource retrieval (e.g., mining, fossil fuel drilling, aquifer discovery). As resource competition and technology competition increases, austere and hostile locations become rich environments for advanced robotics employments. By 2035, these robotic colonies are likely to be employed off-planet, on and under the open ocean, in desert and hostile environments, and even underground. 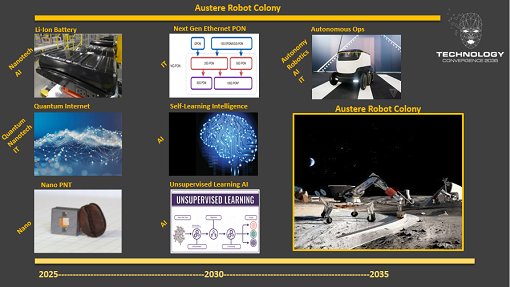 Possible use case:  Colonies of autonomous robots work rapidly in multiple domains to perhaps decontaminate an area after a chemical attack, repair damaged equipment while under fire, or provide C2 nodes between soldiers and airborne or terrestrial operations centers.

Explore this topic further in these related posts:  Trends in Autonomy;  “Own the Night”; Space: Challenges and Opportunities; Star Wars 2050, by proclaimed Mad Scientist Marie Murphy; and Creating a Convergence of Technologies to Defeat the Deadly Fast Inshore Attack Craft Threat Before 2050, by CAPT George Galdorisi, (U.S. Navy–Ret.)

The convergence of artificial intelligence, 5G (or higher) information technology, and fabrication innovation (3D printers) with advances in battery and navigation approaches, bio-inspired robot designs, nanotech soft materials, and multi-robot cooperative systems are likely to give rise to small and stealthy robotic systems that operate below detection thresholds by 2030. Expensive, and highly capable military platforms will likely be replaced by many, cheap, and good enough systems that create “battlefield mass.” However, international action to limit the combat role of military robots make an international convention against deploying lethal autonomous weapon systems highly likely. Driving this convergence are a number of both technical and political considerations. 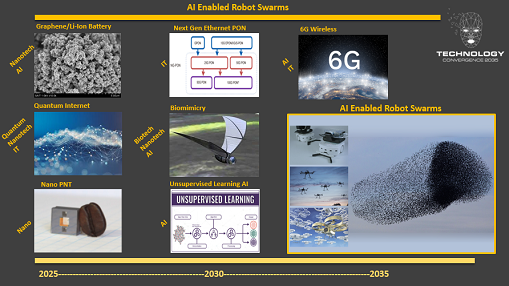 Possible use case:  Large numbers of “Swarm-Bots” with high levels of flexibility, fabricated in real-time and on the spot (3D printing), will perform search and rescue missions. They will work autonomously and easily adapt to changing environments with unforeseen hazards (e.g., natural disasters like hurricanes or earthquakes, collapsed buildings, and combat). AI will give them the ability to work autonomously without any infrastructure or centralized control system.

Explore this topic further in these related posts:  Jomini’s Revenge: Mass Strikes Back!, by Zachery Tyson Brown; The PLA: Close Combat in the Information Age and the “Blade of Victory”; and How Big of a Deal are Drone Swarms?, A New Age of Terror: New Mass Casualty Terrorism Threats, and A New Age of Terror: The Future of CBRN Terrorism, by Zachary Kallenborn.

Innovations within the next ten years in nanotechnology, bio-materials, AI enhanced materials prototyping, edge artificial intelligence chip computing, and sixth generation telecommunications are likely to result in field deployable autonomous systems capable of identifying, harvesting, and manufacturing rare earth materials for weapon system parts in austere locations by 2030. A number of products currently in development or production along with several large-scale research initiatives support this convergence. 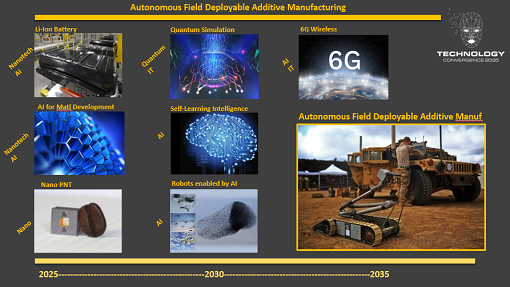 Possible use case:  Long- and short-range autonomous drones prospect, extract, and manufacture materials for production of weapon system parts in austere locations by 2030.

Explore this topic further in these related posts:   The 4th Industrial Revolution, Additive Manufacturing, and the Operational Environment, by Jeremy McLain; Mission Engineering and Prototype Warfare: Operationalizing Technology Faster to Stay Ahead of the Threat; by The Strategic Cohort at the U.S. Army Tank Automotive Research, Development, and Engineering Center (TARDEC); Critical Juncture in DoD Manufacturing Technologies, by Mad Scientist Dr. Richard Nabors; and The Iranian Pursuit of Military Advantage: A Forecast for the Next Seven Years, by Colonel Montgomery Erfourth and Dr. Aaron Bazin.

Take-Aways for the Army (and the DoD)

The Estimation of Technological Convergence by 2035 final report, from which this blog post was excerpted, and the associated briefing slides.

Disclaimer: All views expressed here are the authors’ and do not necessarily reflect those of the Department of Defense, Department of the Army, Army Futures Command (AFC), or Training and Doctrine Command (TRADOC).