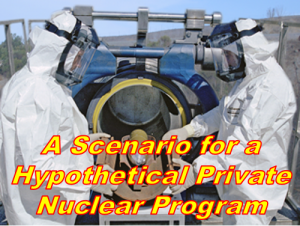 [Editor’s Note: Mad Scientist Laboratory is pleased to publish today’s guest blog post by Mr. Alexander Temerev addressing the possible democratization and proliferation of nuclear weapons expertise, currently residing with only a handful of nation states (i.e., the U.S., Russia, China, the UK, France, India, Pakistan, and North Korea).  We vetted this post with nuclear subject matter experts within our community of action (who wish to remain anonymous) – the following initial comments are their collective input regarding Mr. Temerev’s guest post that follows – read on!]

What is proposed below “is not beyond the realm of possibility and, with enough wise investment, rather feasible — there are no secrets left in achievement of the basic nuclear physics package, and there haven’t been for a while (the key being obtaining the necessary fissile material). A side note — I was a friend and school-mate of the apocryphal Princeton University Physics Undergraduate Student in

1978 who, as part of his final degree project, developed a workable nuclear weapons design with nothing more than the pre-Internet Science Library as a resource. They still talk about the visit from the FBI on campus, and the fact that his professor only begrudgingly gave him an A- as a final grade.”

“Considering the advances since then, it’s likewise no surprise that such a thing could be accomplished today with even greater ease, there remaining the issue of obtaining sufficient fissile material to warrant the effort. Of course, even failure in this regard, done artfully, could still accomplish a sub-critical reaction [aka “a fizzle“– an explosion caused by the two sub-critical masses of the bomb being brought together too slowly] resulting in a militarily (and psychologically) effective 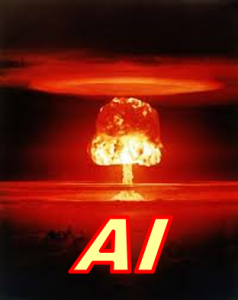 detonation. So, as my colleague [name redacted] (far more qualified in matters scientific and technical) points out, with the advances since the advent of the Internet and World Wide Web, the opportunity to obtain the ‘Secret Sauce’ necessary to achieve criticality have likewise advanced exponentially. He has opined that it is quite feasible for a malevolent private actor, armed with currently foreseeable emerging capabilities, to seek and achieve nuclear capabilities utilizing Artificial Intelligence (AI)-based data and communications analysis modalities. Balancing against this emerging capability are the competing and ever-growing capabilities of the state to surveil and discover such endeavors and frustrate them before (hopefully) reaching fruition. Of course, you’ll understand if I only allude to them in this forum and say nothing further in that regard.”

“Nonetheless, for both good guy and bad, given enough speed and capacity, these will serve as the lever to move the incorporeal data world. This realization will move the quiet but deadly arms race in the shadows, that being the potential confluence of matured Artificial Intelligence (AI) and Quantum technologies at a point in the foreseeable future that changes everything. Such a confluence would enable the potential achievement of these, and even worse, WMD developmental approaches through big-data analysis currently considered infeasible. Conversely, state surveillance modes of the Internet would likewise profit through identifying clusters of seemingly unrelated data searches that could be analyzed to identify and frustrate malevolent actors”. 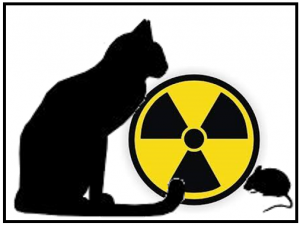 “It is quite conceivable, in this context, that the future of the Internet for our purposes revolves around one continuous game of cat and mouse as identities are sought and hidden between white hat and black hat players. A real, but unanticipated, version of Ray Kurtzweil’s singularity that nonetheless poses fundamental challenges for a free society. In the operational environment to 2050, cyber-operations will no longer be a new domain but one to be taken into account as a matter of course.”

“Once again, all credit goes to [my colleague] for providing the technical insight into this challenge, my contribution being entirely eccentric in nature. I believe the blog is worth publishing, provided that it serves as an opening for furthering discussion of the potential long-range implications such developments would pose.”

A Scenario for a Hypothetical Private Nuclear Program

Let’s assume there is a non-government actor willing to acquire nuclear weapons for some reason. Assume that the group has unlimited financing (or some significant amount of free and untraced money available — e.g., $1 billion in cryptocurrencies). What would be the best way for them to proceed, and what would be the most vulnerable points where they could be stopped?

Stealing existing nuclear weapons would probably not be an option (or will be of limited utility — see below). Modern nuclear devices are all equipped with PALs (permissive action links), rendering them unusable without unlocking codes (the key idea of PAL is removing some small amount of explosives from the implosion shell, different for each detonator – and compensating by adjusting precise timings when each detonator goes off; these timings are different for each device and can be released only by central command authority). Without knowing the entire set of PAL timings and the entire encrypted protocol between PAL controller and detonators, achieving a bona fide nuclear explosion is technically impossible. Some countries like Pakistan and perhaps North Korea do not possess sophisticated PAL systems for their devices; to compensate, their nuclear cores are tightly guarded by the military.

Therefore, even if weapon-grade nuclear materials are available (which is of course another near impossible problem), designing the nuclear explosive device de novo is still unavoidable. The principal design of nuclear weapons is not secret, and achieving the nuclear explosion is a clearly defined problem (in terms of timing, compression and explosion hydrodynamics) that can be solved by a small group of competent physicists. Indeed, the “Nth Country Experiment” by Lawrence Livermore National Laboratory in 1964 has shown that three bright physicists (without previous nuclear expertise) can deliver a plausible design for a working nuclear weapon (they were building an analogue of the Fat Man device, which is bulky and nearly undeliverable; today, more compact options should be pursued instead). A heavily redacted report is available online.

With modern computers, open information about nuclear weapons, some OSINT, and determination, the same feat could probably be accomplished in less than a year. (Some open source software and libraries that can be useful in such an endeavor, e.g., Castro for explosion hydrodynamics; there is also a guidebook for anyone with a deep interest in the field.) Many ideas for the critical part of the device – the neutron initiator — are also discussed in the open literature (here I will refrain from mentioning exact books and papers, but the information is still publicly available). Again, the task is clearly formulated — injecting the neutrons at the very precise moment during the explosion — this is only an engineering problem. 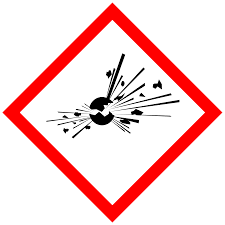 Assembling the device itself is no easy task; it requires precision engineering and the casting of high explosives, which cannot be done without significant pre-existing expertise. However, the brightest mechanical engineers and even explosives technicians can be legally hired on the open market, if not for the direct participation in the project, then for training and knowledge transfer for the project team. Private organizations have achieved even more complicated engineering feats (e.g., rocket engines at SpaceX), so this part looks feasible.

All current nuclear devices require periodic maintenance and re-casting of their plutonium pits with additional weapon-grade plutonium added every few years; otherwise their neutronic profile will gradually become too unfavorable to achieve a full nuclear explosion. If the group has acquired nuclear materials by stealing them, they will have to make use of them during the following few years. Nuclear programs of sovereign states, of course, have the entire weapon-grade plutonium production pipelines at their disposal, so the fresh plutonium is always available. This will be a much harder feat to achieve for a non-state actor. Ironically, the plutonium could be provided by disassembling PAL-equipped stolen or captured nuclear devices, which are less heavily guarded. While it is true that PAL will prevent their full scale explosion, they still can be the priceless source of weapon-grade plutonium.

Conclusion: Safeguarding weapon-grade nuclear materials is the highest priority, as the design details of nuclear devices are hardly a secret these days, and can be readily reproduced by many competent and determined organizations. Emergence of nuclear production pipelines (isotope separation, SILEX [Separation of Isotopes by Laser Excitation], plutonium separation, plutonium-producing reactors) should be monitored everywhere. Even PAL-equipped weapons need to be closely guarded, as they can be the sources of these materials. Groups and non-state actors willing to acquire nuclear capabilities without building the full production pipeline need to act fast and have the design and device prototypes (sans cores) ready before acquiring nuclear materials, as their utility is diminishing every year since acquisition.

REMINDER: Don’t forget to join us tomorrow on-line at the Mad Scientist GEN Z and the OE Livestream Event! This event is open to all, on any device, anywhere (but is best streamed via a commercial, non-DoD network) — plan on joining us at 1330 EST on 21 February 2020 at: www.tradoc.army.mil/watch and engage in the discussion by submitting your questions and comments via this site’s moderated interactive chat room. You can also follow along on Twitter @ArmyMadSci. For more information, click here!

ALSO:  Help Mad Scientist expand the U.S. Army’s understanding of the Operational Environment (OE) — join the 662 others representing 46 nations who have already done so and take a few minutes to complete

our short, on-line Global Perspectives Survey. Check out our initial findings here and stay tuned to future blog posts on the Mad Scientist Laboratory to learn what further insights we will have gleaned from this survey about OE trends, challenges, technologies, and disruptors.

FINALLY:  Don’t forget to enter The Operational Environment in 2035 Mad Scientist Writing Contest and share your unique insights on the future of warfighting — click here to learn more (submission deadline is 1 March 2020!)

Mr. Alexander Temerev is a consultant in complex systems dynamics and network analysis; he is CEO and founder of Reactivity – a boutique consulting company in Geneva, Switzerland.