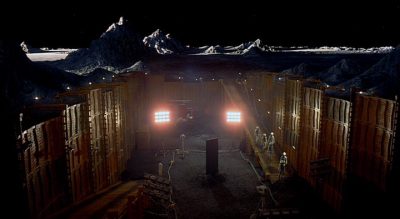 [Editor’s Note: Mad Scientist Laboratory is pleased to introduce a new, quarterly feature, entitled “The Monolith.” Arthur C. Clarke and Stanley Kubrick fans alike will recognize and appreciate our allusion to the alien artifact responsible for “uplifting” mankind from primitive, defenseless hominids into tool using killers — destined for the stars — from their respective short story, “The Sentinel,” and movie, “2001: A Space Odyssey.” We hope that you will similarly benefit from this post (although perhaps in not quite so evolutionary a manner!), reflecting the Mad Scientist Teams’ collective book and movie recommendations — Enjoy!]

The Future of War by Sir Lawrence Freedman. The evolution of warfare has taken some turns that were quite unexpected and were heavily influenced by disruptive technologies of the day. Sir Lawrence examines the changing character of warfare over the last several centuries, how it has been influenced by society and technology, the ways in which science fiction got it wrong and right, and how it might take shape in the future. This overarching look at warfare causes one to pause and consider whether we may be asking the right questions about future warfare.

They Shall Not Grow Old directed by Sir Peter Jackson. This lauded 2018 documentary utilizes original film footage from World War I (much of it unseen for the past century) that has been digitized, colorized, upscaled, and overlaid with audio recordings from British servicemen who fought in the war. The divide between civilians untouched by the war and service members, the destructive impact of new disruptive technologies, and the change they wrought on the character of war resonate to this day and provide an excellent historical analogy from which to explore future warfare.

Runaway directed by Michael Crichton. This film, released in 1984, is set in the near future, where a police officer (Tom Selleck) and his partner (Cynthia Rhodes) specialize in neutralizing malfunctioning robots. A rogue killer robot – programmed to kill by the bad guy (Gene Simmons) – goes on homicidal rampage. Alas, the savvy officers begin to uncover a wider, nefarious plan to proliferate killer robots. This offbeat Sci-Fi thriller illustrates how dual-use technologies in the hands of super-empowered individuals could be employed innovatively in the Future Operational Environment. Personalized warfare is also featured, as a software developer’s family is targeted by the ‘bad guy,’ using a corrupted version of the very software he helped create. This movie illustrates the potential for everyday commercial products to be adapted maliciously by adversaries, who, unconstrained ethically, can out-innovate us with convergent, game changing technologies (robotics, CRISPR, etc.).

The Military Science of Star Wars by George Beahm. Storytelling is a powerful tool used to visualize the future, and Science Fiction often offers the best trove of ideas. The Military Science of Star Wars by George Beahm dissects and analyzes the entirety of the Star Wars Universe to mine for information that reflects the real world and the future of armed conflict. Beahm tackles the personnel, weapons, technology, tactics, strategy, resources, and lessons learned from key battles and authoritatively links them to past, current, and future Army challenges. Beahm proves that storytelling, and even fantasy (Star Wars is more a fantasy story than a Science Fiction story), can teach us about the real world and help evolve our thinking to confront problems in new and novel ways. He connects the story to the past, present, and future Army and asks important questions, like “What makes Han Solo a great military Leader?”, “How can a military use robots (Droids) effectively?”, and most importantly, “What, in the universe, qualified Jar Jar Binks to be promoted to Bombad General?”.

Ex Machina directed by Alex Garland. This film, released in 2014, moves beyond the traditional questions surrounding the feasibility of Artificial Intelligence (AI) and the Turing test to explore the darker side of synthetic beings, knowing that it is achievable and that the test can be passed. The film is a cautionary tale of what might be possible at the extreme edge of AI computing and innovation where control may be fleeting or even an illusion. The Army may never face the same consequences that the characters in the film face, but it can learn from their lessons. AI is a hotly debated topic with some saying it will bring about the end of days, and others saying generalized AI will never exist. With a future this muddy, one must be cautious of exploring new and undefined technology spaces that carry so much risk. As more robotic entities are operationalized, and AI further permeates the battlefield, future Soldiers and Leaders would do well to stay abreast of the potential for volatility in an already chaotic environment. If Military AI progresses substantially, what will happen when we try to turn it off?

Apollo 11 directed by Todd Douglas Miller. As the United States prepares to celebrate the fiftieth anniversary of the first manned mission to the lunar surface later this summer, this inspiring documentary reminds audiences of just how audacious an achievement this was. Using restored archival audio recordings and video footage (complemented by simple line animations illustrating each of the spacecrafts’ maneuver sequences), Todd Miller skillfully re-captures the momentousness of this historic event, successfully weaving together a comprehensive point-of-view of the mission. Watching NASA and its legion of aerospace contractors realize the dream envisioned by President Kennedy eight years before serves to remind contemporary America that we once dared and dreamed big, and that we can do so again, harnessing the energy of insightful and focused leadership with the innovation of private enterprise. This uniquely American attribute may well tip the balance in our favor, given current competition and potential future conflicts with our near-peer adversaries in the Future Operational Environment.

Artemis by Andy Weir. In his latest novel, following on the heels of his wildly successful The Martian, Andy Weir envisions an established lunar city in 2080 through the eyes of Jasmine “Jazz” Bashara, one of its citizen-hustlers, who becomes enmeshed in a conspiracy to control the tremendous wealth generated from the space and lunar mineral resources refined in the Moon’s low-G environment. His suspenseful plot, replete with descriptions of the science and technologies necessary to survive (and thrive!) in the hostile lunar environment, posits a late 21st century rush to exploit space commodities. The resultant economic boom has empowered non-state actors as new competitors on the global — er, extraterrestrial stage — from the Kenya Space Corporation (blessed by its equatorial location and reduced earth to orbit launch costs) to the Sanchez Aluminum mining and refining conglomerate, controlled by a Brazilian crime syndicate scheming to take control of the lunar city. Readers are reminded that the economic hegemony currently enjoyed by the U.S., China, and the E.U. may well be eclipsed by visionary non-state actors who dare and dream big enough to exploit the wealth that lies beyond the Earth’s gravity well.