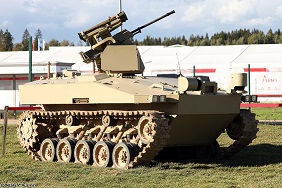 [Editor’s Note: Mad Scientist Laboratory welcomes back returning guest blogger and proclaimed Mad Scientist Mr. Samuel Bendett with today’s post, addressing Russia’s commitment to mass produce independent ground combat robotic systems. Simon Briggs, professor of interdisciplinary arts at the University of Edinburgh, predicts that “in 2030 AI will be in routine use to fight wars and kill people, far more effectively than humans can currently kill.”  Mr. Bendett’s post below addresses the status of current operationally tested and fielded Russian Unmanned Ground Vehicle (UGV) capabilities, and their pivot to acquire systems able to “independently recognize targets, use weapons, and interact in groups and swarms.” (Note:  Some of the embedded links in this post are best accessed using non-DoD networks.)]

Over the past several years, the Russian military has invested heavily in the design, production, and testing of unmanned combat systems. In March 2018, Russian Defense Minister Sergei Shoigu said that mass production of combat robots for the Russian army could begin as early as that year. Now, the Ministry of Defense (MOD) is moving ahead with creating plans for such systems to act independently on the battlefield.

According to the Russian state media (TASS), Russian military robotic complexes (RBCs) will be able to independently recognize targets, use weapons, and interact in groups and swarms. Such plans were stated in the article by the staff of the 3rd Central Scientific Research Institute of the Russian Federation’s MOD.

Russia has already tested several Unmanned Ground Vehicles (UGVs) in combat. Its Uran-6, Scarab, and Sphera demining UGVs were rated well by the Russian engineering forces, and there are plans to start acquisition of such vehicles. However, these systems were designed to have their operators close by. When it came to a UGV that was originally built for operator remoteness in potential combat, things got more complicated.

Russia’s Uran-9 combat UGV experienced a large number of failures when tested in Syria, among them transportation, communication, firing, and situational awareness. The lessons from Uran-9 tests supposedly prompted the Russian military to consider placing more emphasis on using such UGVs as one-off attack vehicles against adversary hard points and stationary targets.

Nonetheless, the aforementioned TASS article analyzes the general requirements for unmanned military systems employed by Russian ground forces. Among them is the ability to solve tasks in different combat conditions during day and night, under enemy fire, electronic and informational counteraction, in conditions of radiation, chemical contamination, and electromagnetic attack – as well as requirements such as modularity and multifunctionality. The article also points out “the [systems’] ability to independently perform tasks in conditions of ambiguity” – implying the use of Artificial Intelligence.

To achieve these requirements, the creation of an “intelligent decision-making system” is proposed, which will also supervise the use of weapons. “The way out of this situation is the intensification of research on increasing the autonomy of the RBCs and the introduction of intelligent decision-making systems at the control stages, including group, autonomous movement and use of equipment for its intended purpose, including weapons, into military robotics,” the article says.

Successfully employing UGVs in combat requires complicated systems, something that the aforementioned initiatives will seek to address. This work will probably rely on Russia’s Syrian experience, as well as on the current projects and upgrades to Moscow’s growing fleet of combat UGVs. On 24 January 2018, the Kalashnikov Design Bureau that oversees the completion of Uran-9 work admitted that this UGV has been accepted into military service. Although few details were given, the statement did include the fact that this vehicle will be further “refined” based on lessons learned during its Syria deployment, and that the Uran-9 presents “good scientific and technical groundwork for further products.” The extent of upgrades to that vehicle was not given – however, numerous failures in Syrian trials imply that there is lots of work ahead for this project. The statement also indicates that the Uran-9 may be a test-bed for further UGV development, an interesting fact considering the country’s already diverse collection of combat UGVs

Today, the Russian military is testing and evaluating several systems, such as Nerekhta and Soratnik. The latter was also supposedly tested in “near-combat” conditions, presumably in Syria or elsewhere. The MOD has been testing smaller Platforma-M and large Vikhr combat UGVs, along with other unmanned vehicles. Yet the defining characteristic for these machines so far has been the fact that they were all remote-operated by soldiers, often in near proximity to the machine itself. Endowing these UGVs with more independent decision–making in the “fog of war” via an intelligent command and control system may exponentially increase their combat effectiveness — assuming that such systems can function as planned.

Automated lethality is but one of the many Future Operational Environment trends that the U.S. Army’s Mad Scientist Initiative is tracking. Mad Scientist seeks to crowdsource your visions of future combat with our Science Fiction Writing Contest 2019. Our deadline for submission is 1 APRIL 2019, so please review the contest details and associated release form here, get those creative writing juices flowing, and send us your visions of combat in 2030!  Selected submissions may be chosen for publication or a possible future speaking opportunity.