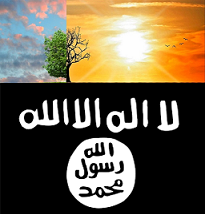 [Editor’s Note:  Mad Scientist Laboratory welcomes back returning guest blogger Mr. Matthew Ader, whose cautionary post warns of the potential convergence of Islamic terrorism and climate change activism, possibly resonating with western populations that have not been (to date) predisposed to listening to their messaging. (Note:  Some of the embedded links in this post are best accessed using non-DoD networks.)]

Climate change is increasingly being viewed not only as an ecological or economic concern, but as a direct security threat. It both endangers vital coastal infrastructure through sea level rise and multiplies existing issues of food insecurity and migration. However, in these analyses, one issue in particular is missed – the likely emergence of transnational terrorist networks which fuse climate grievance with Islamic terrorism.

Ecologically inspired terrorism is, of course, hardly a new concept. There are tens of ecoterrorist organisations, and some have gained substantial notoriety. The model example of this is the Earth Liberation Front, which was highly active in the early 2000s. However, because they tend to operate in developed nations, these groups generally lack the safe areas and large, disenfranchised recruiting bases which empower terrorists elsewhere.

Ecoterrorism, however, is not limited to the developed world – for example, two years ago, an ecoterrorist group detonated a makeshift bomb in Brazil. As the impact of climate change grows ever more severe in the developing world, it is probable that there will be more direct climate-change inspired terrorism. This is especially likely given that the populations of developing nations are increasingly connected to the international information infrastructure – allowing more widespread comprehension of climate change as a global phenomenon with roots in western nations.

These threats pose a new dimension to the terrorist threat. But what is more worrying is the potential for the infection of ecoterrorist groups by radical Islamic terrorist organisations.

Islam contains a strong thread of environmental stewardship. This is not a call for violence in protection of the Earth, but it has already been exploited by radical groups – for example, Al Shabaab banning plastic bags or the Taliban’s endorsement of afforestation. This gives the groups legitimacy in their area of operations. As climate change worsens and grievance intensifies, it is highly likely that this vein of stewardship of the Earth will strengthen in Islamic terrorist propaganda – both as a way of reinforcing legitimacy and to gain recruits or support.

If radical Islamic terrorists can harness climate change grievance, then the threat they offer against western interests increases substantially. This is for three key reasons:

Firstly, Islamic terrorist groups such as Al Qaeda in the Arabian Peninsula or Daesh tend to have relatively developed infrastructure for propaganda and training. While U.S.-led counterterror operations have proven effective in reducing the threat they pose, the carnage in the Bataclan, Manchester Arena, and Nice – to name but a few incidents – clearly indicate that Islamic terrorists can still mount both expeditionary and homegrown terrorist attacks.

Secondly, Islamic terrorist groups have subject matter expertise regarding explosives and strong links with IED supplier networks. The aforementioned Brazilian ecoterrorist group failed to inflict casualties with their crude bomb. If equipped with military-grade high explosive, of the type used by more ‘professional’ terrorist organisations, then the attack could have been much more devastating.

Thirdly, the audience for radical, violent Islamic teaching is very small, and much of it is in the Middle East. The audience for climate grievance is far larger – 70% of Americans aged 18-34 worry a great deal or a fair amount about climate change – and global. This is obviously not to suggest that all climate change activists or people concerned about it are putative terrorists.

However, if even 1 in a 1000 of that American number were willing to take more robust action – such as giving support to terrorists, or even carrying out attacks themselves – it would comprise a support base of approximately 47,200 people. That presents a significant threat, only made worse by the ‘moral fairness’ of climate terrorism – attacking the U.S. for vague oppression of Muslims plays differently in media and politics than attacking the U.S. because of its very real role as one of the world’s largest polluters.

This is of course a brief overview. However, the possibility of a hybridisation of climate change grievance and radical Islamic terrorism is too dangerous to ignore. More research is required, and urgently, to ascertain the extent of the risk and find ways to mitigate it. The world community was practically blindsided by the emergence of Al Qaeda. It would be unacceptably irresponsible to let such a failure happen again.

— Decision in the 21st Century

— Trouble in Paradise: The Technological Upheaval of Modern Political and Economic Systems, by Ms. Marie Murphy, and

Disclaimer: Mr. Ader is not affiliated with U.S. Army Training and Doctrine Command, the U.S. Army, or the U.S. Government. This piece is meant to be thought-provoking and does not reflect the current position of the U.S. Army.