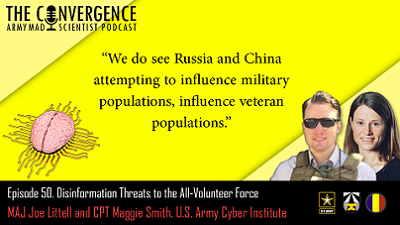 [Editor’s Note:  Army Mad Scientist is pleased to present our latest episode of The Convergence podcast, featuring MAJ Joe Littell and CPT Maggie Smith from the Army Cyber Institute, United States Military Academy, West Point, discussing the impact of information operations on recruitment, retention, and overall force readiness, and how we can gain information advantage over our adversaries — Enjoy!] 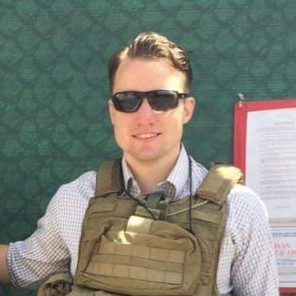 MAJ Joe Littell is a U.S. Army officer and researcher assigned to the Army Cyber Institute at the United States Military Academy. He has been an instructor in the Math and History departments, teaching statistics and intelligence history. His research includes computational propaganda, open source intelligence, narrative warfare, de-platforming, and generative media (such as deepfakes). 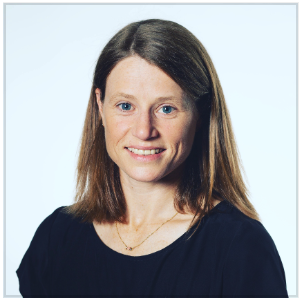 CPT Maggie Smith, PhD, is a U.S. Army cyber officer also assigned to the Army Cyber Institute, where she is a scientific researcher, an assistant professor in the Department of Social Sciences, and an affiliated faculty of the Modern War Institute. She is also the director of the Competition in Cyberspace Project.

In our interview with MAJ Littell and CPT Smith, we discussed the impact of information operations on recruitment, retention, and overall force readiness, and how we can gain information advantage over our adversaries.  The following bullet points highlight key insights from our interview:

Stay tuned to the Mad Scientist Laboratory for our next episode of The Convergence podcast — featuring our interview with Warrant Officer Class 2 Paul Barnes, British Army, discussing his article Learning the Wrong Lessons:  Biases, the Rejection of History, and Single-Issue Zealotry in Modern Military Thought, featured by our colleagues at Modern War Institute; learning from historical conflicts; and fighting against “neophilia” and “presentism“. 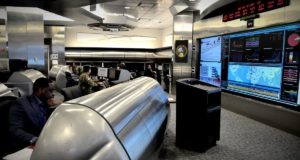 The Army Cyber Institute, in cooperation with the Modern War Institute and the Competition in Cyberspace Project, is conducting its Cyber Policy Challenge Essay Contest to generate new ideas and expand the dialogue within the military cyber community — for more information about this contest, click here!

If you enjoyed this post, check out the Army Cyber Institute’s Cyber Defense Review (CDR) journal for additional thought provoking scholarly articles and essays on the strategic, operational, and tactical aspects of the cyber domain…

The U.S. Congress’ original Cyberspace Solarium Report from 2020 and the 2021 Annual Report on Implementation, addressing the Nation’s progress in implementing the original  report’s 82 recommendations, as well as recommendations added in white papers since its release.

China and Russia: Achieving Decision Dominance and Information Advantage by Ian Sullivan; The Exploitation of our Biases through Improved Technology by proclaimed Mad Scientist Raechel Melling; A House Divided: Microtargeting and the next Great American Threat by 1LT Carlin Keally; The Erosion of National Will – Implications for the Future Strategist by Dr. Nick Marsella; Weaponized Information: What We’ve Learned So Far…; and Insights from the Mad Scientist Weaponized Information Series of Virtual Events

U.S. Demographics, 2020-2028: Serving Generations and Service Propensity; The Inexorable Role of Demographics by proclaimed Mad Scientist Caroline Duckworth; The Future of Talent and Soldiers with MAJ Delaney Brown, CPT Jay Long, and 1LT Richard Kuzma and associated podcast ; and The Trouble with Talent: Why We’re Struggling to Recruit and Retain Our Workforce by Sarah L. Sladek