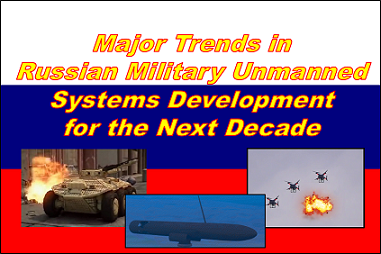 [Editor’s Note: Mad Scientist Laboratory has previously described how unmanned systems, including advanced battlefield robotic systems acting both autonomously and as part of a wider trend in man-machine teaming, will account for a significant percentage of combatant forces in the future. Earlier this month, the U.S. Army awarded contracts for four Robotic Combat Vehicle-Light (RCV-L) and four RCV-Medium (RCV-M) prototypes for testing in late 2021. In today’s post, returning guest blogger and proclaimed Mad Scientist Sam Bendett explores three trends associated with Russian battlefield autonomous systems — read on to learn how this near-peer competitor is embracing this game changing technology!]

The next 10 years will be significant for the Russian military, as it will begin to capitalize on the fruits of its previous decades of labor – the investment in new technologies, testing and evaluation of new weapons and systems, and conceptualizing the future of warfare and Russia’s place in the rapidly evolving art of war. There are three major Russian trends to observe in the next ten years. The first is the emphasis on Russia’s development and use of unmanned combat systems.

Russia’s Syria experience — and monitoring the U.S. use of unmanned systems for the past two decades — convinced the Ministry of Defense (MOD) that its forces need more expanded unmanned combat capabilities to augment existing Intelligence, Surveillance, and Reconnaissance (ISR) Unmanned Aerial Vehicle (UAV) systems that allowed Russian forces to observe the battlefield in real time. The next decade will see Russia complete the testing and evaluation of an entire lineup of combat drones that were in different stages of development over the previous decade. They include the heavy Ohotnik combat UAV (UCAV); mid-range Orion that was tested in Syria; Russian-made Forpost, a UAV that was originally assembled via Israeli license; mid-range Korsar; and long-range Altius that was billed as Russia’s equivalent to the American Global Hawk drone. All of these UAVs are several years away from potential acquisition by armed forces, with some going through factory tests, while others graduating to military testing and evaluation. These UAVs will have a range from over a hundred to possibly thousands of kilometers, depending on the model, and will be able to carry weapons for a diverse set of missions.

The Russian ground forces have also been testing a full lineup of Unmanned Ground Vehicles (UGVs), from small to tank-sized vehicles armed with machine guns, cannon, grenade launchers, and sensors. Today, the MOD is conceptualizing how such UGVs could be used in a range of combat scenarios, including urban combat. And at sea, Russia is looking to field a lineup of Unmanned Underwater and Surface Vehicles (UUVs/USVs) that will give Russian vessels and maritime assets greater ISR range and capability, along with key ASW, de-mining, and even combat characteristics. In fact, there are potential plans to equip naval ships with air, surface, and subsurface unmanned systems, making each vessel in the Russian Navy a carrier and user of unmanned technology.

Another significant trend is the gradual shift from manual control over unmanned systems to a fully autonomous mode, perhaps powered by a limited Artificial Intelligence (AI) program. The Russian MOD has already communicated its desire to have unmanned military systems operate autonomously in a fast-paced and fast-changing combat environment. While the actual technical solution for this autonomy may evade Russian designers in this decade due to its complexity, the MOD will nonetheless push its developers for near-term results that may perhaps grant such fighting vehicles limited semi-autonomous status. The MOD would also like this AI capability be able to direct swarms of air, land, and sea-based unmanned and autonomous systems. To get to the right solutions, the MOD has opened centers and institutions tasked with hi-tech weapons development and testing. This includes Russia’s own DARPA-like agency, the Advanced Research Foundation, where AI and swarming technologies are developed; and the ERA technopark that is managed by the MOD.

Finally, in the coming decade the Russian defense industry will start competing with leading military exporters in offering their own unmanned/autonomous military solutions to potential customers. While the Russian Federation may be the world’s second largest arms exporter, only a handful of states today have a current lock on the unmanned systems market – they include the United States, Israel, and China. There are hints that certain Russian UAV and UGV systems may be offered to potential customers in the Middle East and elsewhere. For example, there is a supposed interest from Brazil to domestically manufacture Russia’s Orlan-10 UAV – the workhorse of the Russian UAV fleet. Russia will be keen to capitalize on the growing security trend in unmanned systems acquisitions, as more and more militaries around the world are realizing the benefits of fielding unmanned systems in place of more expensive manned technologies.

These trends are in line with major developments in unmanned military technology across the world, as key players and customers are testing and evaluating new concepts and weapons. The Russian Federation has entered the 2020s with a modernized and experienced military that has been battle-tested in recent conflicts. The next decade will see Russia seeking to absorb the lessons learned from these conflicts, acquire new technology to fight the next war, and to potentially market their solutions to willing customers and allies.

Have an opinion on battlefield autonomous systems, man-unmanned teaming, and lethal autonomy? Please take a few minutes to complete our short, on-line Global Perspectives Conference Survey; plan on livestreaming our Global Perspectives in the Operational Environment virtual conference next Wednesday, 29 January 2020, at www.tradoc.army.mil/watch starting at 0830 EST (note that this link is not live until 27 Jan 20); and stay tuned to the Mad Scientist Laboratory to learn what insights we glean from this survey and conference regarding potential OE trends, challenges, technologies, and disruptors.