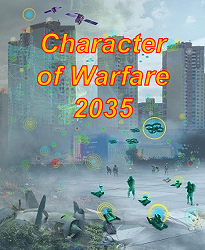 [Editor’s Note: Today’s post provides fifteen insights about trends and technologies impacting the Future Operational Environment and the way the U.S. Army will compete and fight in 2035 and beyond.  Gleaned from the “Character of Warfare 2035” virtual seminar, facilitated last month by the Army Futures Command’s Future Warfare Division, these insights are in no way comprehensive or definitive; rather, they provide an initial, “snap assessment” of what Mad Scientist observed about the changing character of warfare  — Enjoy!]

On 16-20 November 2020, Army Futures Command‘s Future Warfare Division hosted a “Character of Warfare 2035” virtual seminar that brought together military leaders and thinkers, academics, and practitioners to explore the changing character of warfare. This was the first in a series of events to examine how emerging trends and technologies could fundamentally change how the Army fights in the next 15-30 years, as part of a larger Joint and Multinational force.

The Seminar’s stated problem was:

“How does the Army frame the employment of AI, autonomy, robotics, and other emerging technologies to conceive transformational approaches to future warfare?”

The U.S. Army’s Mad Scientist Initiative co-sponsored the event and facilitated a panel on the Information Environment. After observing and participating for five days in multiple panels, the following insights represent implications for the Future Operational Environment:

The Future Warfare Division will continue this series of events addressing the Character of War in 2035 into the coming year as we explore the Future Operational Environment and include expertise from across Government, academia, and industry.

If you enjoyed this post, explore the U.S. Army’s single consistent Operational Environment narrative, spanning the near, mid-, and far terms out to 2050 in the following content:

Disclaimer: The views expressed in this post do not necessarily reflect those of the Department of Defense, Department of the Army, Army Futures Command (AFC), or Training and Doctrine Command (TRADOC).