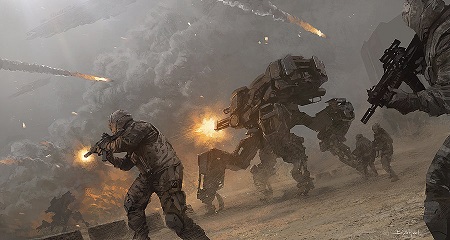 Preface:  This story was inspired by two events. First, Boston Dynamics over the last year had released a series of short videos of their humanoid and animal-inspired robots which had generated a strong visceral Internet reaction. Elon Musk had commented about one video that they would “in a few years… move so fast you’ll need a strobe light to see it.” That visual stuck with me and I was looking for an opportunity to expand on that image.

The second event was a recent trip to the Grand Tetons. I had a black bear rise up out of an otherwise empty meadow less than 50 meters away. A 200-kilo predator which can run at 60kph and yet remain invisible in high grass left a strong impression. And while I didn’t see any gray wolves, a guide discussed how some of the packs, composed of groups of 45-kilogram sized animals, had learned how to take down 700-kilogram bison. I visualized packs of speeding robotic wolves with bear-sized robots following behind.

I used these events as the genesis to explore a completely different approach to designing and employing unmanned ground combat vehicles (GCVs). Instead of the Russian crewless, traditional-styled armored vehicles, I approached GCVs from the standpoint of South Africa, which may not have the same resources as Russia, but has an innovative defense industry. If starting from scratch, how might their designs diverge? What could they do with less resources? And how would these designs match up to “traditional” GCVs?

To find out what would happen, I pitted an Angolan mechanize brigade outfitted with Russian GCVs against South African special forces armed with a top secret indigenous GCV program. The setting is southern Angola in 2037, and there are Demons in the Tall Grass. As Mr. Musk said in his Tweet, sweet dreams!  Mike Matson

Paulo crouched in his slit trench with his squad mates.  He knew this was something other than an exercise.  The entire Angolan 6th Mechanized Brigade had road marched south to Savate, about 60 kilometers from the Namibian border. There, they were ordered to dig fighting positions and issued live ammunition.

Everyone was nervous. Thirty minutes before, one of their patrols a kilometer south of them had made contact.  A company had gone out in support and a massive firefight had ensued. A panicked officer could be heard on the net calling in artillery on their own position because they were being attacked by demons in the tall grass. Nobody had yet returned.

Behind Paulo, the battalion commander came forward. With him were three Russian mercenaries.  Paulo knew the Russians had brought along two companies of robot tanks. The robot tanks sported an impressively large number of guns, missiles and lasers. Two of them had deployed with the quick reaction force.  Explosions suggested that they had been destroyed.

Paulo watched the Angolan officer carefully. Suddenly there was a screamed warning from down the trenches.  He whipped around and saw forms in the tall grass moving towards the trenches at a high rate of speed, spread out across his entire front. A dozen or more speeding lines headed directly towards the trenches like fish swimming just under the water.

“Fire!” Paulo ordered and started shooting, properly squeezing off three round bursts. The lines kept coming. Paulo had strobe light-like glimpses of bounding animals. Just before they burst from cover, piercingly loud hyena cries filled the night.  Paulo slammed his hand on the nearby clacker to detonate the directional mines to his front. The world exploded in noise and dust.

Captain Verlin Ellis, Bravo Group, SANDF, crouched with his NCO, his soldiers, and his Namibian SF counterpart at dawn under a tree surrounded by thick green bush.

“Listen up everyone, the operation is a go. Intelligence shows the brigade in a holding position south of Savate. We are to conduct a recon north until we can fix their position. Alpha and Charlie groups will be working their way up the left side. Charlie will hit their right flank with their predator package at the same time we attack from the south and Alpha will be the stopper group with the third group north of town. Once we have them located, we are to hold until nightfall, then attack.”

The tarps came off Bravo Group’s trucks and the men got to work unloading.

First off were Bravo Group’s attack force of forty hyenas. Standing just under two feet high on their articulated legs, and weighing roughly 40 kilos, the small robots were off-loaded and their integrated solar panels were unfolded to top off their battery charges.

The hyenas operated in pack formations via an encrypted mesh network. While they could be directed by human operators if needed and could send and receive data via satellite or drone relay, they were designed to operate in total autonomy at ranges up to 40 kilometers from their handlers.

Each hyena had a swiveling front section like a head with four sensors and a small speaker. The sensors were a camera and separate thermal camera, a range finder, and a laser designator/pointer. Built into the hump of the hyena’s back was a fixed rifle barrel in a bullpup configuration, chambered in 5.56mm, which fired in three round bursts.

On each side there was a pre-loaded 40mm double tube grenade launcher. The guided, low velocity grenades could be launched forward between 25-150 meters. The hyenas were loaded with a mix of HE, CS gas, HEAT, and thermite grenades. They could select targets themselves or have another hyena or human operator designate a target, in which case they were also capable of non-line-of-sight attacks. The attack dogs contained a five-kilo shaped charge limpet mine for attaching to vehicles. There were 24 attack hyenas.

Second off came the buffalos, the heavy weapons support element. There were six of the 350 kilo beasts. They were roughly the same size as a water buffalo, hence their name. They retained the same basic head sensor suite as the hyenas, and a larger, sturdier version of the hyena’s legs.

Three of them mounted an 81mm auto-loading mortar and on their backs were 10 concave docking stations each holding a three ounce helicopter drone called a sparrow. The drone had a ten-minute flight radius with its tiny motor. One ounce of the drone was plastic explosive. They had a simple optical sensor and were designed to land and detonate on anything matching their picture recognition algorithms, such as ammo crates, fuel cans, or engine hoods.

The fourth buffalo sported a small, sleek turret on a flat back, with a 12.7mm machine gun, and the buffalo held 500 rounds of armor-piercing tracer.

The fifth buffalo held an automatic grenade launcher with 200 smart rounds in a similar turret to the 12.7mm gun. The grenades were programmed as they fired and could detonate over trenches or beyond obstacles to hit men behind cover.

The sixth carried three anti-tank missiles in a telescoping turret. Like the mortars, their fire could be directed by hyenas, human operators, or self-directed.

Once the hyenas and buffalos were charging, the last truck was carefully unloaded.  Off came the boars — suicide bombs on legs. Each of the 15 machines was short, with stubbier legs for stability. Their outer shells were composed of pre-scarred metal and were overlaid with a layer of small steel balls for enhanced shrapnel. Inside they packed 75 kilos of high explosive. For tonight’s mission each boar was downloaded with different sounds to blare from their speakers, with choices ranging from Zulu war cries, to lion roars, to AC/DC’s Thunderstruck. Chaos was their primary mission.

(One Hour after Attack Began) Savate

Paulo and his team advanced, following spoor through the bush.  The anti-tank team begged to go back but Paulo refused.

Suddenly there was a slight gap in the tall grass just as something in front of them on the far side of a clearing fired. It looked like a giant metal rhino, and it had an automatic grenade launcher on top of it. It fired a burst, then sat down on its haunches to hide.

So that’s why I can’t see them after they fire. Very clever, thought Paulo. He tried calling in fire support but all channels were jammed.

Paulo signaled with his hands for both gunners to shoot. The range was almost too close. Both gunners fired at the same time, striking the beast. It exploded with a surprising fury, blowing them all off their feet and lighting up the sky. They laid there stunned as debris pitter-pattered in the dirt around them.

That was enough for Paulo and the men. They headed back to the safety of the trenches.

The hyena yipping increased in volume as predators began to swarm around the armored force. Five or six were circling their perimeter yipping and shooting grenades. Two others crept under some bushes 70 meters to Paulo’s right and laid down like dogs. A long, thin antenna rose out of the back of one dog with some small device on top. The tanks furiously fired at the fleeting targets which circled them.

Mortar rounds burst around the armor, striking a Russian tank on the thin turret top, destroying it.

From a new direction, the ghost machine gun struck a Russian robot tank with a dozen exploding armor-piercing rounds. The turret was pounded and the externally mounted rockets were hit, bouncing the tank in place from the explosions. A robot tank popped smoke, instantly covering the entire armored force in a blinding white cloud which only added to the chaos. Suddenly the Russian turrets all stopped firing just as a third robot tank was hit by armor-piercing rounds in the treads and disabled.

If you enjoyed this blog post, read “Demons in the Grass” in its entirety here, published by our colleagues at Small Wars Journal.

Mike Matson is a writer in Louisville, Kentucky, with a deep interest in national security and cyber matters. His writing focuses on military and intelligence-oriented science fiction. He has two previous articles published by Mad Scientist: the non-fiction “Complex Cyber Terrain in Hyper-Connected Urban Areas,” and the fictional story, “Gods of Olympus.”  In addition to Louisville, Kentucky, and Washington, DC, he has lived, studied, and worked in Brussels, Belgium, and Tallinn, Estonia. He holds a B.A. in International Studies from The American University and an M.S. in Strategic Intelligence from the National Intelligence University, both in Washington, DC. He can be found on Twitter at @Mike40245.