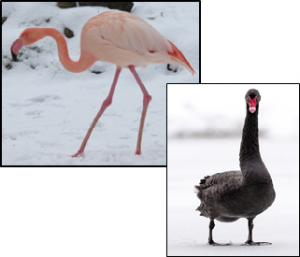 [Editor’s Note:  Mad Scientist Laboratory is pleased to present the following post by returning guest blogger Mr. Frank Prautzsch, addressing the Black Swans and Pink Flamingos associated with our last terrestrial frontier — the Arctic.  Mr. Prautzsch has previously posted on how the future of vaccines is in nano-biology and convergence with the immune system of the body.]

By now, all Mad Scientists and understudies of history are familiar with the conditions for the unknown, unknowns (i.e., Black Swans) and the known, knowns (i.e., Pink Flamingos).  Perhaps no place has a greater collection of these attributes than the Arctic. The Arctic Region remains arguably our last international frontier.  Over the last 20 years, climate change, unexplored energy reserves, short transpolar navigation, eco-tourism, and commerce (with and without indigenous populations) are taking center stage among stakeholders.   This focused international interest in the Arctic has pronounced security implications.

To start our Arctic flamingo category, potential energy reserves take center stage. The US Geological Survey estimates that the Arctic holds 18-23% of the untapped oil reserves remaining on the planet. Alaska and West Siberia are estimated to hold 30% of the world’s remaining gas reserves. Russia has attained strategic deals with Exxon Mobil, Eni, and Statoil for securing up to $500B in investment over the next 30 years. Shell paid $2.1B for 275 blocks of off-shore drilling plots northwest of Alaska, but has encountered difficulties in the harsh climate. The United States and Norway are building stronger partnerships on Arctic drilling.[1]

Perhaps the largest flamingo, and also the leader of the flock (or flamboyance), is the Russian military. Most of the Arctic Ocean littoral states are modernizing their military forces in the Arctic. With countries rebuilding their Arctic military capabilities, in concert with vague territorial zones, rich natural resource options, and no real enforcement of maritime law, some concern should be paid to any Russian attempt to have prime sectors of the Arctic become a “new Crimea”. This is a particularly acute topic should Russia model its behaviors after China and the lack of a concerted international community response to China’s sovereignty claims in the South China Sea.

In August of 2007, two Russian mini-subs planted a Russian flag on a titanium mast 14,000 feet below the North Pole. This was tied to their interpretation of the 1982 UN Convention on the Law of the Sea allowing nations to claim sub terrain beyond 200 nautical miles if they prove that such a location is part of their continental shelf.

In the summer of 2014, “Putin broke away from talking about the Ukraine, and indicated that Russia’s future really didn’t lie to its west, but instead in the north. ‘Our interests are concentrated in the Arctic…. And of course, we should pay more attention to issues of development of the Arctic and the strengthening of our position [there].’”[2]

For the past 4 years, Norway, Finland, and Sweden joined much of the international community to overtly criticize Russian representatives and share their disappointment over Russian violation of international and maritime law by invading Crimea and the Ukraine. Finland and Sweden are exploring NATO membership. The volume of Russian TU-97 Bear C4ISR over flights of Finland’s and Sweden’s waters has gone up exponentially. The bombers are flying C4ISR missions but could easily be armed to follow through with their primary mission.[3]

The day after sanctions were placed on Russia for the invasion of Crimea and their activities in the Ukraine, President Putin moved an expeditionary naval fleet into the Arctic. The ships were dispatched to deliver personnel, equipment, and supplies to the New Siberian Islands where a permanent base was constructed. Central to this operation are revitalized military bases at Kotelny and Wrangel Islands, which were abandoned in 1993.  Kotelny now has an airbase and is permanent home of the 99th Arctic Tactical Group. Another new air base was commissioned at Cape Schmidt. Additionally, an expanded airstrip at Novaya Zemlya can now accommodate fighters supporting the Northern Fleet. These moves have prompted serious criticism from Canada.

In addition to Kotelny, the Russian Northern Fleet has expanded operations from the Russian town of Alakurtti, Murmansk, which is 50km from the Finnish border. Large portions of the rest of the Northern Fleet are now there with a full complement of 39 ships and 45 submarines. Alakurtti is the new garrison for the Russian Arctic Command with 6000 + Arctic-trained ground troops. Russia maintains a fleet for 54 icebreakers and 78 icebreaker-hulled oil/gas supertankers, while the US maintains one heavy breaker and has hopes of acquiring three more. Russia feels that they have to move to the Arctic Ocean to secure their energy future, and to protect the economic interests of their country. The Russians intend to “homestead”, realizing that global energy supplies will again favor their geographical posture someday.[4]  From this strategic position, they maintain multiple black swan options, for which the West will have little to challenge.

Reinforcing these energy efforts in the Arctic, Russia deployed its first floating nuclear power plant in April 2018.  Moving slowly from St. Petersburg, its final destination is Pevek on the Arctic coast, where it will replace a land-based nuclear power source.[5] This position is 86km from Alaska and the installation uses similar reactor technology to that of Russian icebreaker ships.[6] The primary concern of the international community is the potential for a nuclear accident, but this new power plant could serve a broader Russian purpose in sequestering and dominating the Arctic and its resources.

One of the baby black swans in the Arctic is our unknown ability to generate a clear national will and investment for heavy icebreakers. The US Coast Guard seeks to build three heavy and three medium icebreakers of US lineage. The entire world (including Russia) seeks the help of Finland in icebreaker building and development. With a lack of port construction facilities and a Request for Proposal for three heavy icebreakers from untested US designs, this cygnet will fight for survival against cost, schedule, performance, and risk. While it all looks good on paper, the operational risks to Arctic operations between now and 2025 are pronounced. At the end of the day, the US should consider modular multi-role heavy icebreaker oil/gas tanker hulls that could be tailored to support multiple US missions and interests, including ship escort duty, refueling, C4ISR, vertical lift support, contingency maneuver asset delivery, oil recovery, medical, SAR, and scientific missions…not just icebreaking.

Another indigo black swan is the US Army’s and its Sister Services’ cold weather climate equipment and training. We must improve our survival techniques, mobility and transport, and combat capabilities in cold weather. In a recent Arctic exercise, the US Marine Corps borrowed arctic tentage and soldier wearables from Sweden and Norway.  US Arctic tentage has not changed since the mid 1950s. A recent Request for Information introduces the USMC to its first change in cold weather hats and gloves in decades. It is also important to understand the lack of available C4ISR, the performance of commercial off the shelf C4ISR systems subjected to heating and condensation cycles, and the effects of cyber on C4ISR and transportation. Failure in any of these mission areas will render a highly capable force almost useless.

Finally, the most enormous black swan on the planet resides in the Arctic tied to climate change. The introduction of pronounced Arctic sheet ice melting over the past eight summers has opened up the potential for at least seasonal trans-polar shipping and also selected air routes. While we are in love with pretty pictures of polar bears on ice floes and satellite imagery of an ever-shrinking mass, the true story is 3D. We soon will not have Arctic ice of any accumulated age. This is due to warm subsurface ocean thermoclines and high densities of chlorophyll not before seen. Certain NOAA models predict “Ice Free” Arctic Summers by 2047. The impact on climate, fish/wildlife, weather severity, sea levels, and of course human beings is far from being understood. The ice shelves of Greenland are losing one cubic mile of fresh water per week. This is the equivalent of all of the drinking water consumed by Los Angeles in a year.

So, what do we know going into the unknown? (National Geographic, April 2017)

1. The earth’s temperature goes up and down, but it’s gone up 1.69 deg. F consistently since the end of WWII.

2. CO2 warms the planet and we have increased the amount of CO2 by almost half since 1960.

3. 97% of scientists and 98% of authors fault humans for global warming.

4. Arctic sea ice is shrinking and glaciers are receding worldwide.

5. The number of climate-related disasters has tripled since 1980.

6. Retreat and extinction of various plants and animals is starting to occur.

7. Albeit noble, the switch to renewable energy does not offset the world appetite for energy.

While the green-think world worries, commerce is casting an eye on how the Northwest Passage can cut shipping distances between Asia and Europe by up to 3500-4500 miles. A French cruise line is preparing for trans-polar cruises during optimal weather and navigation times. Russia will seek transit and escort fees over its sovereign territories. Reykjavik, Iceland is labeled as the Singapore of 2050. The truth is we will all have to challenge the unknowns of this great swan over time, and we are ill prepared for this confrontation. While Russia looks like a flamingo, its Arctic behaviors can be totally swan-like. If we are looking into the future, we must fear our drift towards fair-weather Clausewitzian warfare while the rest of the planet sees otherwise. Enjoy the birds!

One Reply to “57. Our Arctic—The World’s Pink Flamingo and Black Swan Bird Sanctuary”