(Editor’s Note: Mad Scientist Laboratory is pleased to present the following guest blog post by Dr. Lydia Kostopoulos, addressing the future of technological information and the tantalizing possible realities they may provide us by 2050.)

The history of technology and its contemporary developments is not a story about technology, it is a story about people, politics and culture. Politics encouraged military technologies to be developed which have had tremendous value for civilian use. Technologies that were too ahead of their cultural times were left behind. As the saying goes ‘need is the mother of all inventions’, and many technological advances have been thanks to the perseverance of people who were determined to solve a problem that affected their life, or that of their loved ones and community. Ultimately, technology starts with people, ideas come from people, and the perception of reality is a human endeavor as well.

The ‘reality’ related technologies that are part of the current and emerging information landscape have the potential to alter the perception of reality, form new digital communities and allegiances, mobilize people, and create reality dissonance. These realities also contribute to the evolving ways that information is consumed, managed, and distributed. There are five components: 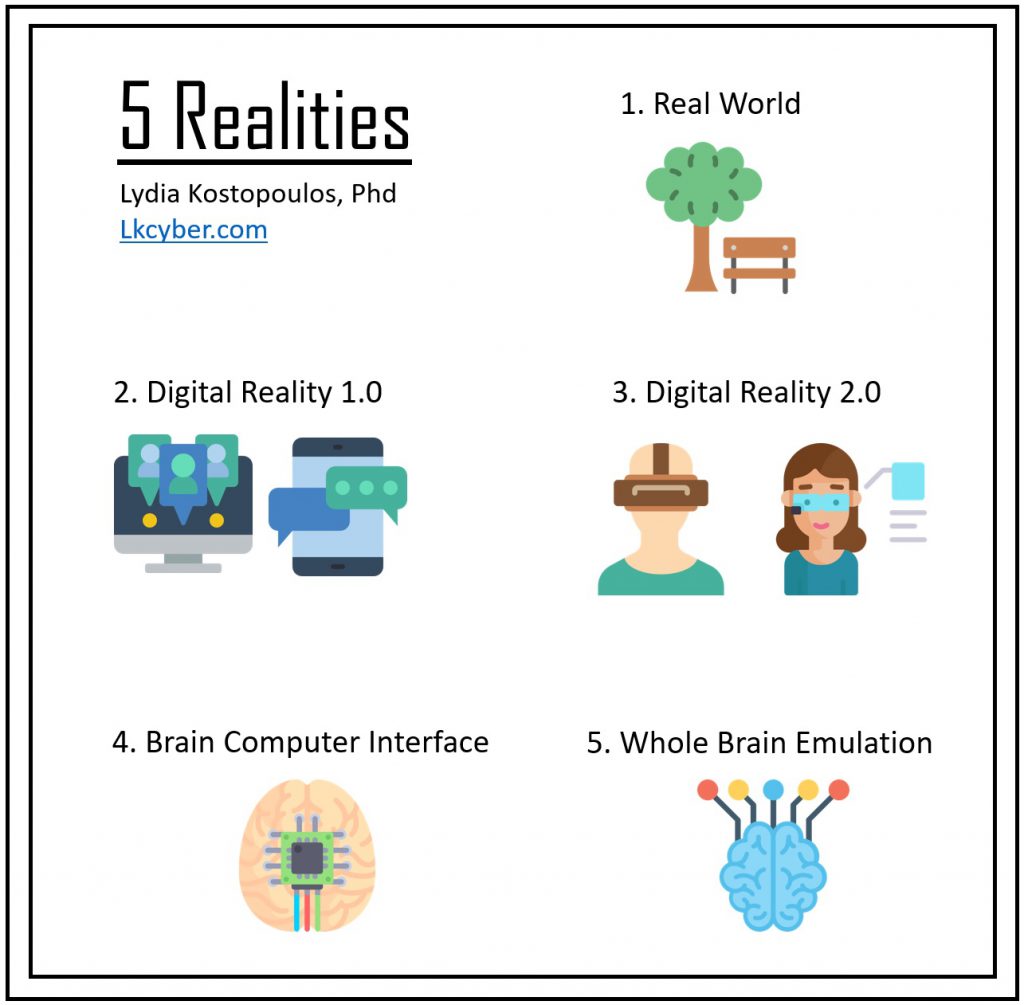 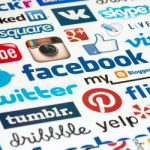 2. Digital Reality 1.0: There are many already existing digital realities that people can immerse themselves into, which include gaming, as well as social media and worlds such as Second Life. Things that happen on these digital platforms can affect the real world and visa-versa. 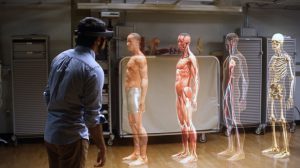 3. Digital Reality 2.0: The Mixed Reality (MR) world of Virtual Reality (VR) and Augmented Reality (AR). These technologies are still in their early stages; however, they show tremendous potential for receiving, and perceiving information, as well as experiencing narratives through synthetic or captured moments.

Virtual Reality allows the user to step in a “virtual” reality, which can be entirely synthetic and a created digital environment, or it could be a suspended moment of an actual real-world environment. The synthetic environment could be modeled after the real world, a fantasy, or a bit of both. Most virtual realities do not fully cross over the uncanny valley, but it is only a matter of time. 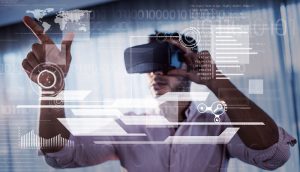 Suspended moments of actual real-world environments involve 360 degree cameras which capture a video moment in time; these already exist and the degree in which it feels like the VR user is teleported to that geographical and temporal moment in time will, for the most part, depend on the quality of the video and the sound. This VR experience can also be modified, edited and amended just like regular videos are edited today. This, coupled with technologies that authentically replicate voice (ex: Adobe VoCo) and technologies that can change faces in videos, create open-ended possibilities for ‘fake’ authentic videos and soundbites that can be embedded.

Augmented Reality allows the user to interact with a digital layer superimposed on their physical real world. The technology is still in the early stages, but when it reaches its full potential, it is expected to disrupt and transform the way we communicate, work, and interact with our world. 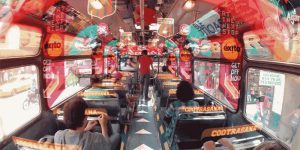 Some say the combination of voice command, artificial intelligence, and AR will make screens a thing of the past. Google is experimenting with their new app Just a Line, which allows the users to play with their augmented environment and create digital graffiti in their physical space. While this is an experiment, the potential for geographic AR experiences, messages (overt or covert), and storytelling is immense. 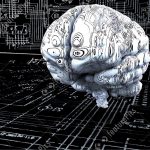 4. Brain Computer Interface (BCI): Also called Brain Machine Interface (BMI). BCI has the potential to create another reality when the brain is seamlessly connected to the internet. This may also include connection to artificial intelligence and other brains. This technology is currently being developed, and the space for ‘minimally invasive’ BCI has exploded. Should it work as intended, the user would, in theory, be directly communicating to the internet through thought, the lines would blur between the user’s memory and knowledge and the augmented intelligence its brain accessed in real-time through BCI. 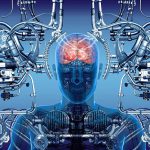 In this sense it would also be able to communicate with others through thought using BCI as the medium. The sharing of information, ideas, memories and emotions through this medium would create a new way of receiving, creating and transmitting information, as well as a new reality experience. However, for those with a sinister mind, this technology could also have the potential to be used as a method for implanting ideas into others’ minds and subconscious. For an in-depth explanation on one company’s efforts to make BCI a reality, see Tim Urban’s post “Neuralink and the Brain’s Magical Future”. 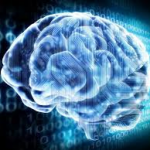 5. Whole Brain Emulation (WBE): Brings a very new dimension to the information landscape. It is very much still in the early stages, however, if successful, this would create a virtual immortal sentient existence which would live and interact with the other realities. It is still unclear if the uploaded mind would be sentient, how it would interact with its new world (the cloud), and what implications it would have on those who know or knew the person. 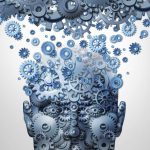 As the technology is still new, many avenues for brain uploading are being explored which include it being done while a person is alive and when a person dies. Ultimately a ‘copy’ of the mind would be made and the computer would run a simulation model of the uploaded brain, it is also expected to have a conscious mind of its own. This uploaded, fully functional brain could live in a virtual reality or in a computer which takes physical form in a robot or biological body. Theoretically, this technology would allow uploaded minds to interact with all realities and be able to create and share information. 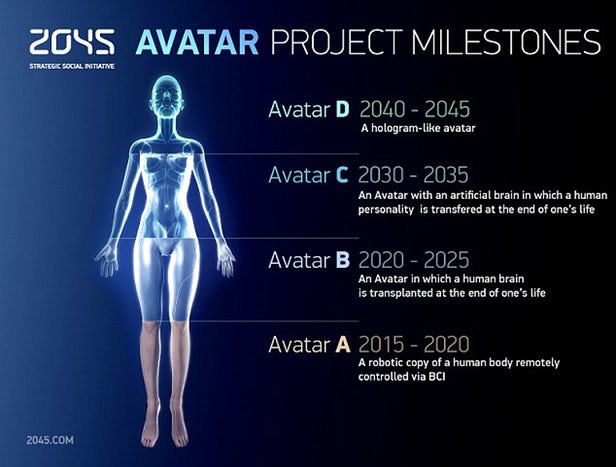 Apart from another means for communicating with others, and transmitting information, it can also be used as a medium to further ideologies. 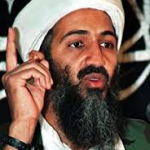 For example, if Osama bin Laden’s brain had been uploaded to the cloud, his living followers for generations to come could interact with him and acquire feedback and guidance. Another example is Adolf Hitler; 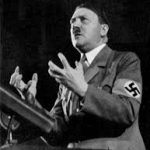 if his brain were to have been uploaded, his modern-day followers would be able to interact with him through cognitive augmentation and AI. This of course could be used to ‘keep’ loved ones in our lives, however the technology has broader implications when it is used to perpetuate harmful ideologies, shape opinions, and mobilize populations into violent action. As mind-boggling as all this may sound, the WBE “hypothetical futuristic process of scanning the mental state of a particular brain substrate and copying it to a computer” is being scientifically pursued. In 2008, the Future of Humanity Institute at Oxford University published a technical report about the roadmap to Whole Brain Emulation. 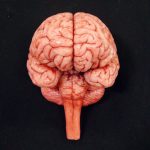 Despite the many questions that remain unanswered and a lack of a human brain upload proof of concept, a new startup, Nectome, which is “Committed to the goal of archiving your mind,” offers a brain preservation service and when the technology is available, they will upload the brains. In return, the clients pay a service fee of $10,000 and agree for the embalming chemicals to be introduced into their arteries (under general anesthesia) right before they pass away, so that the brain can be freshly extracted.

These technologies and realities create new areas for communication, expression and self-exploration. They also provide spaces where identities transform, and where the perception of reality within and among these realities will hover somewhere above these many identities as people weave in and through them in their daily life.

Dr. Lydia Kostopoulos is an advisor to the AI Initiative at The Future Society at the Harvard Kennedy School, participates in NATO’s Science for Peace and Security Program, is a member of the FBI’s InfraGard Alliance, and during the Obama administration received the U.S. Presidential Volunteer Service Award for her pro bono work in cybersecurity. Her work lies in the intersection of strategy, technology, education, and national security. Her professional experience spans three continents, several countries and multi-cultural environments. She speaks and writes on disruptive technology convergence, innovation, tech ethics, cyber warfare, and national security.

One Reply to “41. The Technological Information Landscape: Realities on the Horizon”