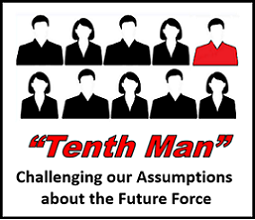 [Editor’s Note:  Mad Scientist Laboratory is pleased to publish our latest “Tenth Man” post. This Devil’s Advocate or contrarian approach serves as a form of alternative analysis and is a check against group think and mirror imaging. We offer it as a platform for the contrarians in our network to share their alternative perspectives and analyses regarding the Operational Environment (OE). Today’s post examines a foundational assumption about the Future Force by challenging it, reviewing the associated implications, and identifying potential signals and/or indicators of change. Read on!]

Assumption: The United States will maintain sufficient Defense spending as a percentage of its GDP to modernize the Multi-Domain Operations (MDO) force. [Related MDO Baseline Assumption – “b. The Army will adjust to fiscal constraints and have resources sufficient to preserve the balance of readiness, force structure, and modernization necessary to meet the demands of the national defense strategy in the mid-to far-term (2020-2040),” TRADOC Pam 525-3-1, The U.S. Army in Multi-Domain Operations 2028, p. A-1.]

Over the past decades, the defense budget has varied but remained sufficient to accomplish the missions of the U.S. military. However, a graying population with fewer workers and longer life spans will put new demands on the non-discretionary and discretionary federal budget. These stressors on the federal budget may indicate that the U.S. is following the same path as Europe and Japan. By 2038, it is projected that 21% of Americans will be 65 years old or older.1 Budget demand tied to an aging population will threaten planned DoD funding levels.

In the near-term (2019-2023), total costs in 2019 dollars are projected to remain the same. In recent years, the DoD underestimated the costs of acquiring weapons systems and maintaining compensation levels. By taking these factors into account, a 3% increase from the FY 2019 DoD budget is needed in this 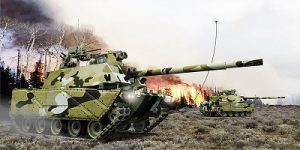 timeframe. Similarly, the Congressional Budget Office (CBO) estimates that costs will steadily climb after 2023. Their base budget in 2033 is projected to be approximately $735 billion — that is an 11% increase over ten years. This is due to rising compensation rates, growing costs of operations and maintenance, and the purchasing of new weapons systems.2 These budgetary pressures are connected to several stated and hidden assumptions:

Implications: If these assumptions prove false, the manned and equipped force of the future will look significantly different than the envisioned MDO force. A smaller DoD budget could mean a small fielded Army with equipping 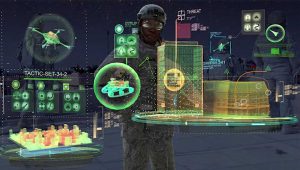 decisions for less exquisite weapons systems. A smaller active force might also drive changes to Multi-Domain Operations and how the Army describes the way it will fight in the future.

If you enjoyed this alternative view on force modernization, please also see the following posts:

1 “The long-term impact of aging on the federal budget,” by Louise Sheiner, Brookings, 11 January 2018 https://www.brookings.edu/research/the-long-term-impact-of-aging-on-the-federal-budget/