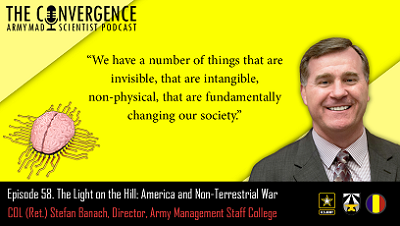 [Editor’s Note:  Army Mad Scientist is pleased to present our latest episode of The Convergence podcast, welcoming back COL Stefan Banach (USA-Ret.), Director, Army Management Staff College, to discuss non-terrestrial war, weapons of mass deception, and why we are at a pivotal point in the defense of our country — Enjoy!] 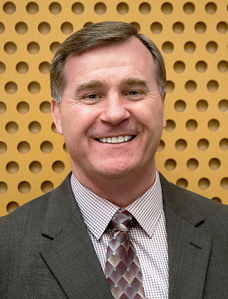 COL Stefan Banach (USA-Ret.) is a Distinguished Member of the 75th Ranger Regiment and served in that organization for nine years, culminating with command of the 3rd Ranger Battalion from 2001-2003. He led U.S. Army Rangers during a historic night combat parachute assault into Afghanistan on October 19, 2001, as the “spearhead” for the Global War on Terror. Steve subsequently led U.S. Army Rangers in a second combat parachute assault into Al Anbar Province in western Iraq in 2003.  He served with distinction in the U.S. Army from 1983 to 2010. Since then, he has provided executive consulting services to a diverse range of clients at a number of prestigious institutions.  Steve Banach also serves as the Director, Army Management Staff College, an element of Army University responsible for “igniting the leadership potential for every Army civilian.”

In today’s interview with COL Banach, we explore non-terrestrial war, weapons of mass deception, and why we are at a pivotal point in the defense of our country.  The following bullet points highlight key insights from our interview:

Stay tuned to the Mad Scientist Laboratory for our next episode of The Convergence — featuring Shubhi Mishra, founder and CEO of Raft, a data-intensive digital consultancy, discussing wicked problems in national security; finding creative, mission-focused solutions; and equipping the DoD with sustainable, emerging technology.

If you enjoyed this post and podcast, check out its companion essay The “Convergence” and Non-Terrestrial War, as well as the following previous posts and podcasts by COL Banach:

Virtual War – A Revolution in Human Affairs (Parts I and II)

The Exploitation of our Biases through Improved Technology, by proclaimed Mad Scientist Raechel Melling

A House Divided: Microtargeting and the next Great American Threat, by 1LT Carlin Keally