(Editor’s Note: The Mad Scientist Laboratory is pleased to present the following guest blog post by Mr. Jeff Becker. If you are interested in submitting a guest post, please select “Guest Bloggers” from the menu above and review the submission instructions)

“Future conflicts will increasingly emphasize the disruption of critical infrastructure, societal cohesion, and basic government functions in order to secure psychological and geopolitical advantages, rather than the defeat of enemy forces on the battlefield through traditional military means.” National Intelligence Council, Global Trends: Paradox of Progress (January 2017), p. 7

Chairman Dunford frequently describes the future operating environment as presenting military challenges that are increasingly transregional, multidomain, and multifunctional in nature. These changes are driving the need for a Joint Force capable of conducting

Globally Integrated Operations – that is, the ability to purposefully bring together the full panoply of joint capabilities in time and space to achieve military tasks under a broad range of strategic goals. The Joint Staff’s Joint Operating Environment 2035 describes these tasks as ranging from shaping and containing military challenges, to deterring and denying adversary initiatives, to disrupting and degrading adversary campaigns, to compelling adversaries or destroying their ability to resist U.S. goals and objectives.

This view is intended to drive us to think beyond the design of Army and Joint Forces as simply optimized for speedy and decisive battle. Although this happy result is always desired, as Lawrence Freedman noted in his recent book, The Future of War: A History, warfare in the future will likely be marked by adversaries that do not accept battle on our terms and societies that necessarily accept the results of battles when they do in fact occur. This disconnect between of “decisive” military engagements and sustainable political settlement suggests yet another attribute of future conflict that goes even further than the “transregional, multidomain, multifunctional” attributes of warfare – one that is critical to account for as we adapt our land and broader joint forces for the future.

This attribute – multidimensionality – was set out in the latest NIC Global Trends study, which notes that:
The 2035 Joint Force will confront adversaries that employ integrated, whole-of-government efforts to nullify current U.S. and Joint Force advantages and employ new capabilities, often in surprising ways.
(NIC) “Warring will be less and less confined to the battlefield, and more aimed at disrupting societies.”
National Intelligence Council, Global Trends: Paradox of Progress (January 2017), p. 7 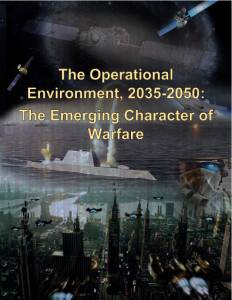 This theme was further explored in The Operational Environment 2035-2050: The Emerging Character of Warfare, which goes on to note that the ability to engage in cognitive, moral, and physical attacks directly against what the Multidomain Battle Concept terms “the strategic support area,” may in fact be the primary means of great power competition going forward. 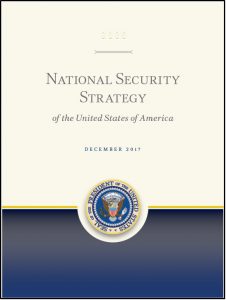 Helpfully, the new National Security Strategy highlights the multidimensional nature of warfare. For example, it describes the critical need to protect key economic assets, and defend U.S. sovereignty and national integrity in and through cyberspace “…cyberspace offers state and non-state actors the ability to wage campaigns against American political, economic, and security interests without ever physically crossing our borders.” National Security Strategy, p. 12.

Forces keyed only to geography and the physical attributes of a military force will fail. A wide range of capabilities allow adversaries to avoid the military forces of a nation to disrupt the efficient function of complicated, tightly connected advanced economies, societies, infrastructure, and the trust and common purpose on which they are based. A multidimensional character of future warfare is a Janus-faced reminder that warfare has physical and moral components, and impacts the people and government as much as the Army itself.

Jeff Becker is the Chief Futurist supporting the Joint Concepts Division at the Joint Staff J-7 and their deep futures study, Joint Operating Environment 2035. The views here are his alone and do not necessarily reflect those of the Joint Staff or the Department of Defense.