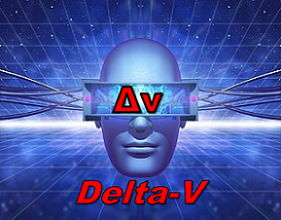 [Editor’s Notes: Today’s post by returning guest blogger Chris Elles was initially submitted as an entry to our recent Mad Scientist Operational Environment in 2035 Writing Contest. His incisive post addresses the ephemeral nature of military superiority, given today’s relentless technological acceleration and ubiquity.  Decisive advantage is now only achievable by accelerating the delta-v velocity of our adaptability vice that of our adversaries. Mr. Elles explores the associated ramifications of this new reality for the U.S. Army’s Soldiers and Leaders, now through the mid-Twenty First Century — Enjoy!]

DEFINITION
A change in velocity (direction and/or speed)

ORIGIN
1960s, from delta (as a mathematical symbol denoting variation) + v for velocity.

Decisive advantage for the United States in the 2020-2050 time period is dependent far less on technological monopoly and far more on increasing the velocity of organisational adaptability to technological ubiquity.

The persistent decisive advantage attained by the United States military in the post-WWII through post-Cold War period evolved into a much more egalitarian technological drag race-like sprint by 2035 against challenger and disrupter adversaries, where the combatant quickest to adapt to emerging technology achieves perishable decisive advantage.

In short, long held technological dominance by the United States military has given way to broader and faster egalitarian dual use technology access for all adversaries.

In 2035, this decline of technological monopoly and rise of technological ubiquity has been the single greatest catalyst in the declining durability, longevity, and rising sunk cost fallacy risk of exquisite trillion dollar legacy platform capability.

Perishable decisive advantage is now achieved only through accelerating the delta-v velocity of adaptability (learning, iterating, and deploying) across the military, relative to the velocity of adaptation by our adversaries.

In 2020, we simply could not predict with any degree of certainty which technologies would provide decisive advantage in 2035 or even further out to 2050.

But we learned that increasing the delta-v of our experiential adaptation to emerging technology was worthy of comprehensive organisational focus, offering a far better return on effort and resource investment than the declining accuracy of traditional forecasting and predictions. 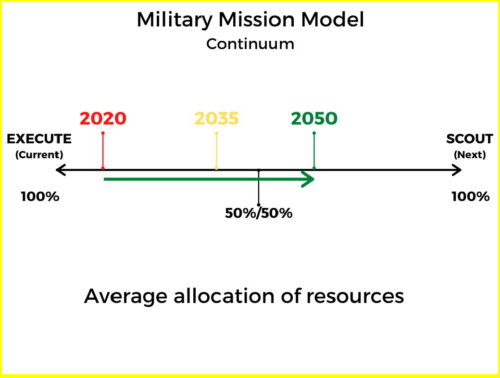 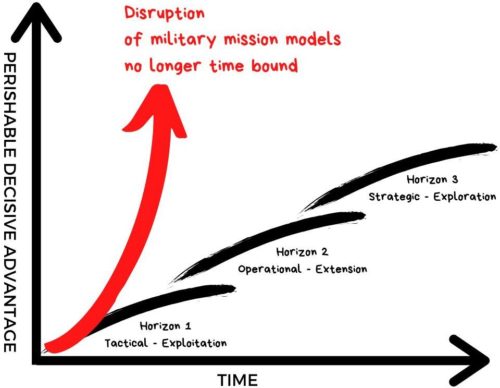 >>> What new skills and talent management techniques will be required by the Army in 2035?

In the 2020’s, it became glaringly obvious new skills were required for every Soldier, Sailor, and Airman in order to collaboratively scout for new military mission models.

These included a foundation in:

All under the halo of a Joint U.S. military innovation doctrine distributed by 2025, iterating out of the “organize(ing) for innovation” 2018 National Defense Strategy. 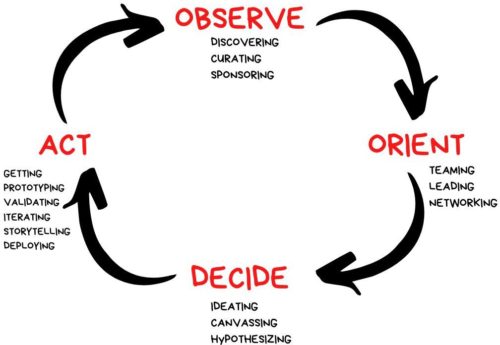 Innovation requires a different form of leadership, more akin to leading from a position of support

Leveraging the 1st, 2nd, and 3rd order effects of exploiting each others’ personal networks

Getting (out of the building)

Experiential learning with and from end users

Building and testing things our Soldiers, Sailors, and Airmen need

Telling the story of the problem; the policy, process, and platform users; and how investment will make the organisation more adaptable and lethal

Deployment of new processes, policies, and platforms that make the organisation more adaptable and lethal

Managing military talent in the increasingly competitive high delta-v world beyond 2035 demands a much deeper dive into individual, small team, unit, and organisation-wide performance metrics to compete against adversary challengers and disruptors out to 2050.

If we don’t measure it, we can’t improve it. 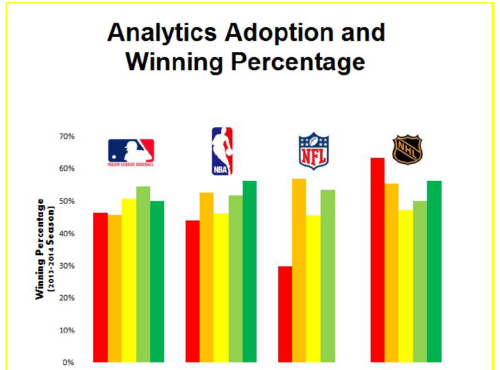 The military talent management environment in 2035 is far more analogous to baseball and video game player statistics and analytics of 2020, with the ability to drill down to specific behaviours, habits, and performance outcomes that positively impact the delta-v of our perishable decisive advantage relative to adversaries.

Individual, team, unit, formation, and service performance is optimised for accelerating the delta-v of adaptation relative to adversaries using analytical, evidence based performance metrics analogous to the sabermetrics example in the book and film Moneyball.

Curiosity and Creativity have no rank.

The lead users in the military are everyone utilising policies, processes, and platforms to execute their respective military mission models.

Lead users at the bottom of the military hierarchy are best positioned to
scout future military mission models, as they live closest to the problems.

>>> How do we prepare future Soldiers and Leaders for these challenges?

In 2035, we prepare our soldiers for this high velocity world by training them as innovation scouts.

But rank in direct support of innovation efforts is the catalyst
to reach innovation deployment.

In 2035, innovation command is a commonly used adaptation of mission command, using experimental minimum viable solutions to problems curated by command and scouted within the arcs of commander’s intent.

The Big 5 of 2035 are not based on platforms, but people and pipelines.

Formal innovation training is fully integrated force wide in 2035, consisting of a 3×5 model:

● Innovator Introduction
● Audience: Force-wide NCOs/Officers, and selected others based on individual performance metrics

In the 2020’s, the U.S. military completely overhauled its procurement processes and optimized them for adaptability, velocity, and deployment outcome based on the foundation laid by the Rapid Equipping Force.

>>> What does strategic, operational, and tactical (relative) surprise look like in 2035?

The feasibility of tactical, operational, and strategic surprise in 2035 has increased quite considerably since 2020.

But it is also matched by a proportional increase in the perishability of surprise, stemming from accelerating technological discovery and ubiquity.

Perishable tactical, operational, and strategic surprise approaches single use utility before being decisively and quickly countered.

The days of persistent decisive advantage are over.

Sprinting for an entire marathon is desirable, but it is neither feasible nor viable.

By 2025, 10% of the entire force was participating in innovation sprints every year.

By 2030, 10% of the entire force participated in innovation sprints every quarter.

In 2035, 10% of the entire force participates in innovation sprints every month.

By 2040, 10% of the entire force will participate in innovation sprints every week.

In 1920, the outcome of war was determined by attrition.

In 1990, the outcome of war was determined by manoeuvre.

In 2050, the outcome of war will be determined by velocity.

Relentless technological acceleration between 2020-2035 catalyzed the single characteristic that most determined the outcome of war — shifting from attrition and beyond maneuver, accelerating towards relative velocity of adaptability — delta-v.

In 2035, our perishable decisive advantage over challenger and spoiler adversaries is almost exclusively dependent on our relative delta-v.

In 2035, and with a view towards 2050, Boyd and Clausewitz are the inseparably intertwined DNA strands at the core of an adaptive military helix, optimized for reducing Clausewitz’s friction and accelerating Boyd’s delta-v.

The Changing Dynamics of Innovation, by Mr. Ian Sullivan

Blurring the Lines Between Competition and Conflict

What We are Learning about the Operational Environment

Ground Warfare in 2050: How it Might Look, courtesy of Dr. Alexander Kott 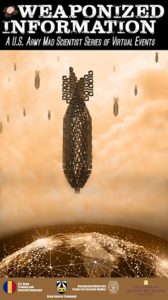 >>> REMINDER 1: The Mad Scientist Initiative will facilitate the next webinar in our Weaponized Information Virtual Events series this Wednesday, 1 July 2020 (1300-1430 EDT):

Weaponized Information: The Storm After the Flood — This virtual wargame will be facilitated by Dr. Gary Ackerman, The Center for Advanced Red Teaming, University at Albany, SUNY, with crowdsourced participation.

>>> REMINDER 2:  You have 3 Days Left to Submit Information Warfare Vignettes!!! We launched this crowdsourcing exercise to complement our Weaponized Information Virtual Events and we want to hear from you! It’s not too late — review submission guidelines on our flyer here, then craft and submit your most innovative and insightful visions of information warfare to us at: MADSCITRADOC@gmail.com. The winner of our writing contest will be present at our virtual conference on 21 July 2020. Deadline for submission is 1 July 2020!

>>> REMINDER 3: If you missed the first four webinars in our Mad Scientist Weaponized Information Virtual Events series — no worries! You can watch them again here [via a non-DoD network].

Chris Elles is a Sergeant in the RNZIR(Reserve) who has developed and delivered innovation training packages for both the NZDF and ADF while serving as Phase Manager for the NZ Army Aumangea Assessment Programme. He is currently a Non-Resident Fellow at the Krulak Center, Marine Corps University. Chris is an entrepreneur, startup mentor, and angel investor. As an early stage employee, he was responsible for the physical launch beyond books for Amazon.com. He is an alumnus of Stanford University Graduate School of Business and completed Hacking 4 Defense Educator Certification at Georgetown University. Chris is curating the Innovator Handbook Mk I: A Handbook For Small Team Military Innovation. He can be found on Twitter @InnovatorHB