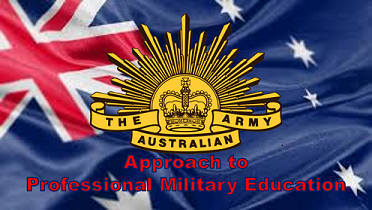 [Editor’s Note: Mad Scientist Laboratory is pleased to publish today’s post by guest blogger LTCOL Greg Colton, Australian Army, addressing the intellectual component of military power.  In our current drive to modernize the U.S. Army into a Multi-Domain Operations (MDO)-Capable Force by 2028 and set the conditions for fielding an MDO-Ready Force in 2035, we must not forget the lessons learned from our last major transformation in the 1980s.  The tactical and operational excellence that enabled us to completely rout Iraqi ground forces in 100 hours was not only the result of effective doctrine and the acquisition of the “Big 5” weapon systems, but also due to the development of our Combat Training Centers (CTCs) and Leader Development platforms like the Non-Commissioned Officer Education System and the School of Advanced Military Studies. Read on to learn how one of our key allies is approaching their Army’s Professional Military Education.]

“We must push ourselves to think in creative and unconstrained ways to ensure our warfighting philosophy is appropriate and informs our future capabilities” — LTGEN Rick Burr, Australian Chief of Army, in Accelerated Warfare

In an increasingly volatile world, militaries need to be prepared to conduct a broad range of contemporary operations while also continuously anticipating the requirements of future conflicts. As the Australian Chief of Army so succinctly puts it, “Preparedness is dynamic. It requires us to be ready now, while concurrently becoming future ready.” Key to this is the development of the intellectual component of fighting power, both of individuals and of the Army as an organisation, so that the Army is able to adapt to changes in circumstances quickly enough to win future conflicts.

Yet, as the Institute for Defense Analyses points out, “military institutions recognize the need for leaders who can adapt, but struggle with exactly how to teach or train them to do so.” Within the Australian Army, Professional Military Education (PME) is an important component of a wider approach that blends training, education, and experience to develop a workforce able to cope with the demands of war in an ever-changing environment.

The Army’s approach to PME

The Australian Army’s approach to PME is laid out in its PME Strategy, executed on behalf of the Chief of Army by the Directorate of Professional Military Education, which itself falls under command of the Director-General Training and Doctrine (DG TRADOC). The Directorate uses two broad approaches to enhance the intellectual component of fighting power. First, using the principle of connectivism it seeks to connect those who can impart specialist knowledge to the workforce. Secondly, it seeks to develop organisational adaptability through promoting a contest of ideas. It delivers these approaches through a number of different mechanisms which allows content to be tailored to the target audience. These mechanisms include its online portal, The Cove, unit PME packages, webinars, and conferences.

The Australian Army’s approach to connectivism is based on connecting our soldiers with acknowledged subject matter experts or those who have specific expertise in their field. A good example of the former is TX Hammes who gave a CoveTalk on the development of artificial intelligence in unmanned platforms, while an example of the latter is this article by a military workshop manager on improving the efficiency of his workshop’s layout and processes. Regardless of the source, connectivism enables the Army to link both experts and expertise with the wider workforce to develop the intellectual component of fighting power within our individual soldiers and officers. In doing so, it promotes the dissemination of best practice across the force.

However, this approach only provides half of the solution. For argument’s sake, let’s take as a given that warfare is an ever-evolving phenomenon. As such, best practice in and of itself cannot be enough, as the very term indicates the pre-determination of an optimal solution derived within a static set of variables. The uniqueness of each theatre, campaign, battlefield, or individual soldier’s field of fire will mean that the variables on which best practice has been developed will never exactly replicate. Consequently, tactical solutions to complex problems will rarely (if ever) be found using a cookie cutter template. Instead, we need an Army that is institutionally flexible enough to recognise and incorporate emerging practice to solve unique problem sets. In other words, if best practice provides the theoretical foundations required to understand the tactical problem, emerging practice provides the intellectual adaptability to actually solve it.

A contest of ideas

This leads us to the second approach we use to enhance the intellectual component of fighting power:  promoting a contest of ideas.  Fostering a culture of contesting ideas has two benefits. Firstly, it gives our people the confidence to analyse the unique problem set they are faced with and recommend bespoke solutions to a hierarchy that is often one or two steps removed from the ground truth. Secondly, and just as importantly, it inculcates an organisational culture within the Army that is willing to recognise, and accept, emerging practice (i.e., the recommendations from those trying to solve the current problem) rather than always insisting on best practice (i.e., what we have always done in similar circumstances). This is essential if we are to win future wars.

A good example of how the Australian Army promotes a contest of ideas is The Cove’s recent Army 2030 Competition, in which readers were invited to submit a ‘script’ of no more than 100 words on what they thought the Army of 2030 should look like. Run over the period of a calendar month, it generated 48 entries from a broad range of authors, from front-line practitioners to life-long academics. Collectively, these scripts were viewed over 93,000 times in 31 days and were the genesis for numerous comments on our website, within units and messes across the country, and on social media. At the end of the competition, the entries and online discussion were captured and passed on to the Australian Army’s Directorate of Future Land Warfare to inform its work.

This ‘crowd sourcing’ of ideas doesn’t just support the work of those tasked with thinking about the future structures and capabilities of the Army. It also encourages the Army’s people to think about the future of warfare, encourages debate on how the organisation can best meet the challenges of the future, and gives our people the confidence to contribute to that debate.

Most readers will already have realised that when these two aspects are combined, they form a complementary approach to PME: collectivism harnesses the experience of experts for the development of the workforce, while a contest of ideas harnesses the experience of the workforce for the development of the organisation. If the Army is to be truly adaptive, one cannot exist without the other. An organisation which always insists on best practice, rather than emerging practice, is risking ruin through imposing dogmatic solutions to complex problems, while an army that automatically reacts to instantaneous suggestions from the workforce, ungrounded in theoretical understanding, risks repeating the mistakes of the past.

Thus, contributions need to be sought from a broad range of viewpoints if the Army is to be ready for future conflict. As Kevin O’Leary from Shark Tank is at pains to point out:  “Nobody has a monopoly on good ideas.” This is particularly important to remember within hierarchical organisations such as the military. It can be all too easy for generals, staff officers, or senior public servants to fall into the trap of believing that experience alone is the foundation of hard-earned knowledge, and that new ideas from juniors that challenge doctrine, the status quo, or the strategic narrative are unnecessarily subversive.

Yet, when the next war comes it will not be the desk officers or policy experts that do the fighting, or the dying, in foreign fields. It is the young military practitioner who, regardless of rank, will find themselves trying to solve a unique problem set in the most testing of circumstances. In the words of Nassim Taleb, it is they who have ‘skin in the game.’ As such, we owe that young soldier or officer not only the very best foundational professional military education we can give them, but also an organisation willing and able to adapt to bespoke solutions based on ground truth. As an Army, we must set the conditions such that our people challenging the status quo and contesting ideas is our organisation’s comfort zone.

This requires a complementary approach to PME, developed and delivered now, so that we may enhance the intellectual component of fighting power in time for the Army to fight, and win, the next war. It is an approach that the team at The Cove is dedicated to delivering for the Australian Army.

– Setting the Army for the Future (Parts I, II, and III)

Mad Scientist also invites you to mark your calendars and plan on joining the TRADOC G-2’s Distinguished Speaker Series on-line next Tuesday, 23 July 2019, from 1430-1600 EDT, to participate virtually in Dr. Tuomas Sandholm‘s presentation on Superhuman AI for Strategic (=Game – Theoretic) Reasoning for the DoD –  Beyond Machine Learning.  To whet your appetite, please see Army game-theory research better allocates military resources, fight cancer; It’s Hard To Win At Poker Against An Opponent With No Tell; and A Poker-Playing Robot Goes to Work for the Pentagon.

LTCOL Greg Colton is an infantry officer with 18 years’ experience in both the British and Australian armies, including operational service in Europe, the Middle East, Central Asia, and the Pacific. Greg has had a range of regimental, instructional, and staff postings and recently took a years’ sabbatical to accept a Research Fellowship at the Lowy Institute, Australia’s leading international policy think-tank. While at the Lowy Institute, he ran a Defence funded project examining drivers of instability in the Pacific. On his return to the Army, Greg assumed his current position as SO1 Professional Military Education at Forces Command. He is also Director of The Cove.